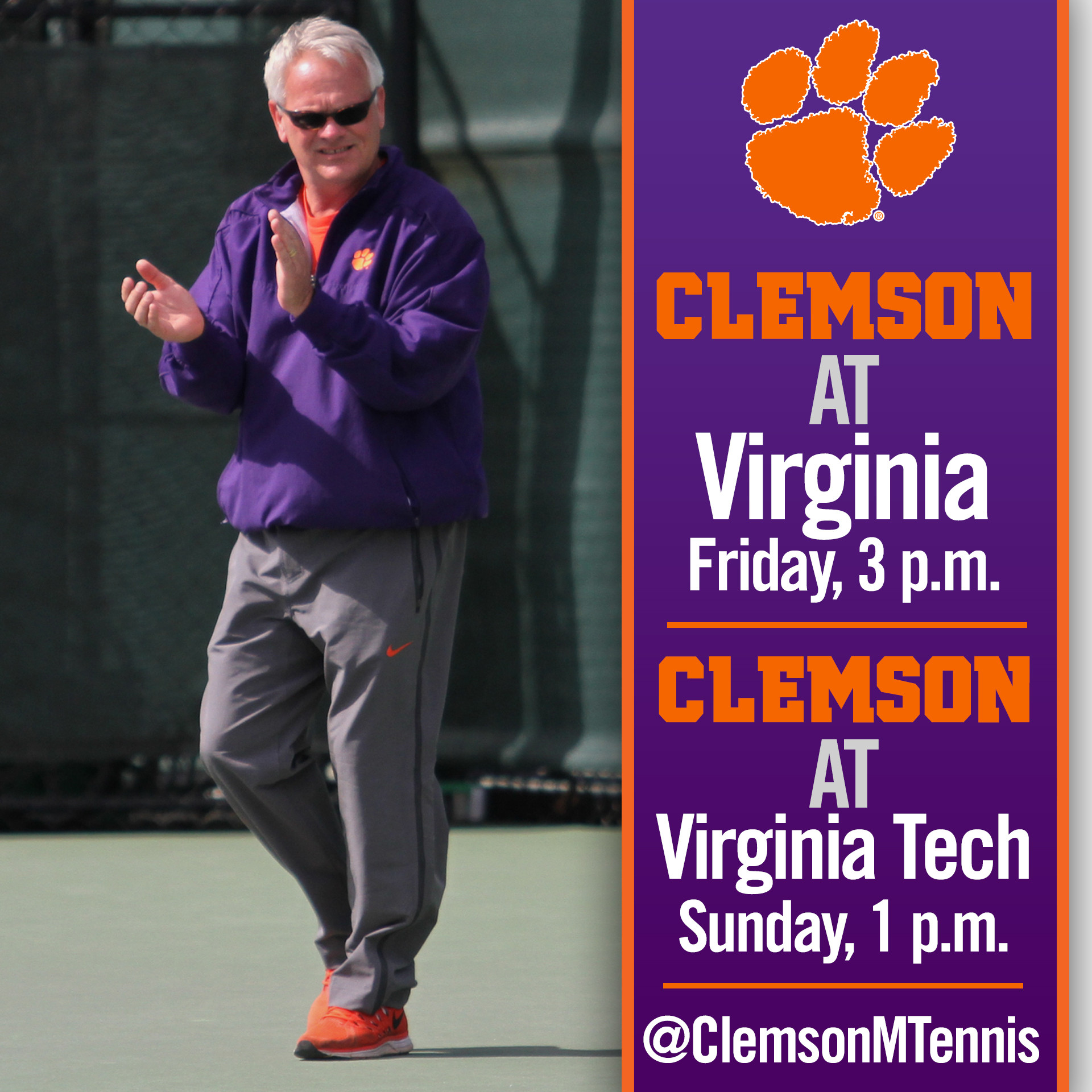 Clemson Heads North to Face No. 7 Virginia, No. 15 Virginia Tech This Weekend

CLEMSON, S.C. – The 62nd-ranked Clemson men’s tennis team travels north to take on No. 7 Virginia on Friday at 3 p.m. and No. 15 Virginia Tech on Sunday at 1 p.m. Live scoring will be available for both matches and updates will be posted on Twitter @ClemsonMTennis. Additionally, live video is available for Friday’s match at Virginia through a paid subscription. The link can be found above. A link to Virginia Tech’s live scoring will be posted on Sunday.

Clemson is 9-6 on the season after a pair of wins over College of Charleston and Presbyterian College last Sunday. The Tigers hosted Georgia Tech last Friday to open ACC play, but fell 5-2. Senior captain Hunter Harrington is ranked as the 91st-best singles player in the nation this week by the ITA.

The Cavaliers have been ranked as high third in the weekly ITA poll this season. Most recently, Virginia lost a closely contested match to top-ranked Oklahoma on Tuesday. Prior to that, the Cavaliers picked up their first two ACC wins over NC State and Wake Forest. Virginia is 9-3 overall on the season.

Virginia boasts five singles players ranked among the top 125 in the country this week, led by Ryan Shane and Thai-Son Kwiatkowski, ranked No. 3 and No. 6, respectively. Mitchell Frank is ranked No. 27 and two more Cavaliers ranked No. 70 and No. 101. In doubles, Virginia also boasts two ranked duos. The team of Luca Corinteli and Shane is ranked 19th nationally, while the team of Mac Styslinger and Kwiatkowski is ranked 52nd.

Clemson leads the overall series with Virginia 42-23. The Tigers and Cavaliers met last season in Clemson, a closely contested match that Virginia won 4-3.

The Hokies are on a seven match winning streak coming into this weekend. Most recently, Virginia Tech knocked off second-ranked Duke 6-1 on Sunday. The Hokies are 10-1 overall on the season, with their only loss coming at the hands of North Carolina in Chapel Hill at the ITA Kickoff Event on Jan. 24.

One doubles duo is ranked this week, the team of Amerigo Contini and Andreas Bjerrehus is tabbed 64th-nationally by the ITA. In singles, Bjerrehus, this week’s ACC Player of the Week, is ranked 40th, Contini is ranked 55th and Joao Monteiro is tabbed 98th.

The Tigers hold the overall series advantage against Virginia Tech 10-7, including a 5-2 win over the Hokies in Clemson last season.