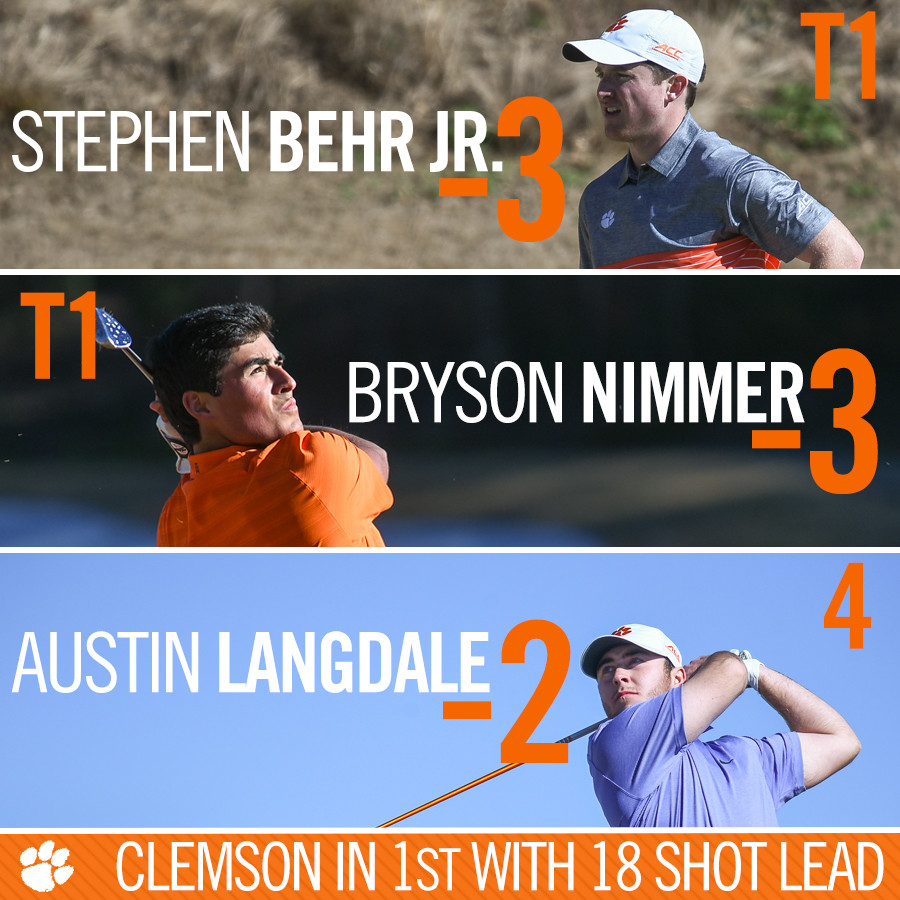 Clemson Has 18-shot Lead Entering Final Round at Bandon Dunes

Clemson, S.C.—Graduate student Stephen Behr fired a season best 66 and Austin Langdale added a 68 to lead eighth-ranked Clemson to a season best 274 team score and an 18-shot lead entering the final round of the Bandon Dunes Championship in Bandon, Ore.   The third and final round will be held Tuesday at the par 71 course.

Larry Penley’s Tigers have a 564 score for the first 36 holes, 18 shots better than Washington and Missouri.  UAB, a top 25 team last year, is in fourth place at 584, 20 shots behind the Tigers.

On Tuesday the Tigers will pursue Penley’s 66th career victory since he became head coach of the program in 1983.    Clemson has won a tournament by at least 20 shots just five times in history, including a record 33-shot victory at a tournament in Hawaii in 1998.

Behr had a near flawless round with five birdies and 13 pars for his five-under-par 66.  It was just one shot off his career best round of 65 set at the Palmetto Invitational three years ago.   It was the fifth round in the 60s for Behr this year, the third time he has done it in the second round of a tournament. Behr is tied for first entering the final round with a 139 score.

One of the players tied for the individual lead is Clemson freshman Bryson Nimmer.    He has had rounds of 69-70, the only Tiger with a pair of under par rounds thus far in the tournament.  Nimmer had nine-hole scores of 35-35 on Monday.

Langdale had a four-under-par 32 on the front nine, then shot a 36 on the back nine to finish with a three-under-par 68.  The junior has a  140 score after two rounds, fourth in the field of 69 players.

Carson Young was a fourth Clemson player to score under par on Monday.  The junior had three birdies and two bogeys and has a 146 total after two rounds, good enough for 15th place.

Miller Capps shot an even-par 71 on Monday thanks to two-under-par play for the last six holes.  He stands in 25th place after 36 holes with a 149 total.

Clemson also has two individuals in the field. Peter Mathison had a 72 on Tuesday and is in a tie for 20th place after two rounds with a 148 total.  Josh Fickes is in 38th place with a 152 total after a 74 on Monday.

Live scoring is available at golfstat.com.