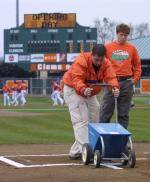 Doug Kingsmore Stadium’s playing surface is one of the best in the country thanks to the dedication of many members of the Clemson Grounds Crew. Mike Echols, Supervisor of Athletic Grounds for the past four years and former Tiger golfer (1981-83), heads up the team that was recently honored.

In January of 2005, the American Baseball Coaches Association and Turface Athletics awarded Echols and the grounds crew, which includes many volunteers, as having the best collegiate baseball field in the country based on their exemplary infield and turf maintenance programs. Clemson received a crystal trophy recognizing its excellence in maintenance, one ton of Turface MVP sports field conditioner, and $400 designated for field maintenance equipment.

“Mike and his staff exemplify what Clemson is all about,” said Head Coach Jack Leggett. “They exhibit tremendous pride and a never-ending work ethic.

“We play on many fields and are familiar with a lot of grounds crews. But our players and coaches always comment that we have the best. The pride in their work is far above any I’ve ever seen. Our players, coaches, and fans appreciate their dedication to Clemson Baseball and our facility.”