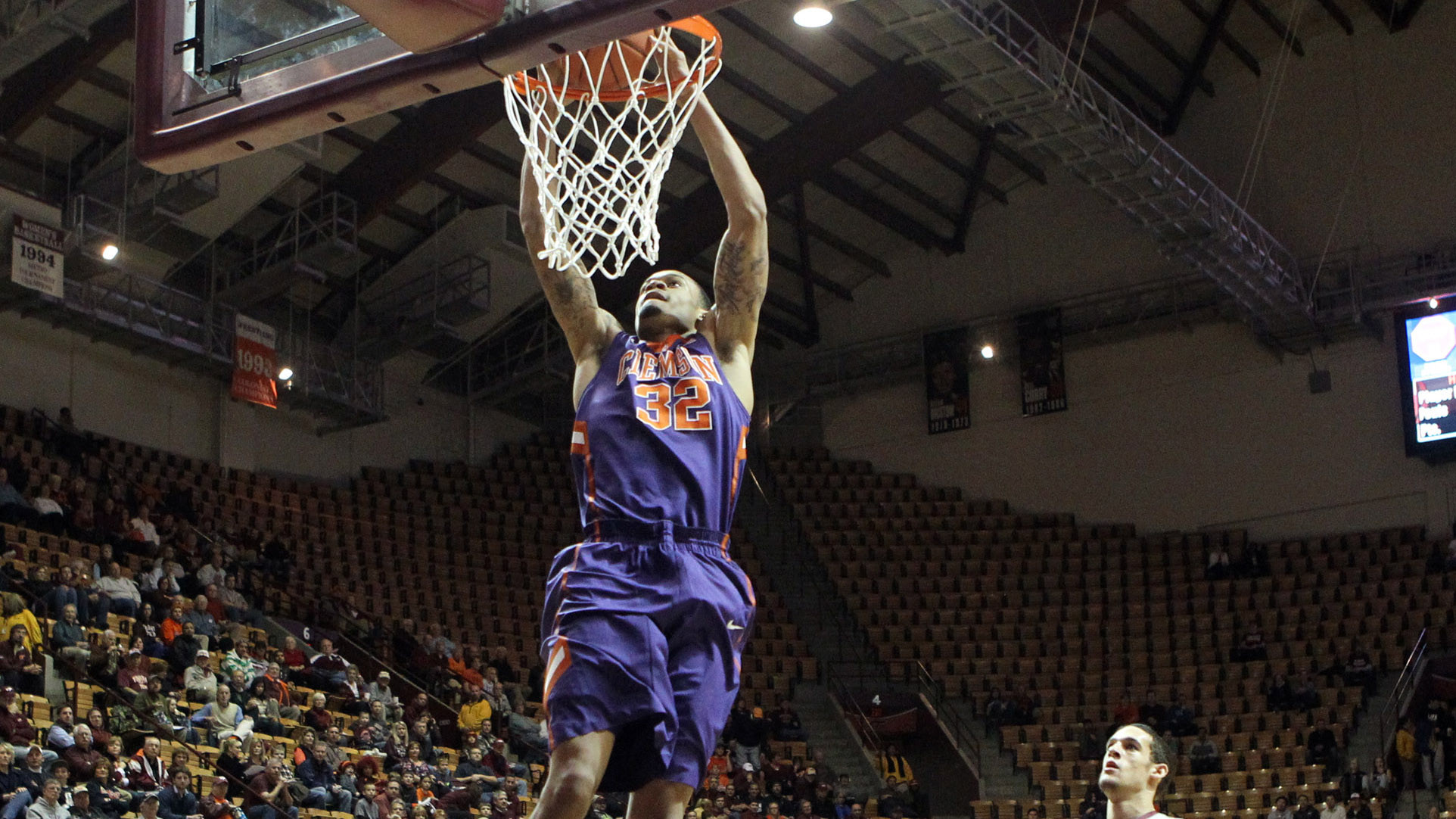 BLACKSBURG, VA – With the game tied at 49, Clemson outscored Virginia Tech by a score of 7-0 over the final two minutes to earn its second straight ACC road victory. The Tigers moved to 12-4 overall and 3-1 in the ACC. It gave Clemson a 2-0 start on the road in the ACC for the first time since the 2006-07 season. The loss dropped the Hokies to 8-8 overall and 1-3 in league play.

After Hokies freshman Ben Emelogu drained a baseline three to tie the game at 49, Clemson made all the clutch play. Adonis Filer hit a crucial basket for a second straight road game, an old-fashioned three-point play to give Clemson the lead right back. The Tiger defense stiffened and forced three misses inside the final 75 seconds to preserve the win.

K.J. McDaniels led Clemson with 14 points. Rod Hall added 11, including a pair of three-pointers. Filer posted nine points in 22 minutes. Clemson shot just 40 percent for the game, but hit 6-of-16 (.375) from three. The Tiger defense held Tech to 42 percent on field goals, including a 31 percent mark (5-of-16) from three. Clemson took advantage of Tech’s nine turnovers, converting them into an 11-3 advantage off of miscues.

Tech led 10-7 early behind a pair of triples from freshman Devin Wilson. Clemson countered with a 9-0 run to take a six-point lead. The Tigers held the Hokies without a field goal for over six minutes of game block until Joey van Zegeren flushed home a dunk. The Hokies rallied and tied the game at 17 with under five left in the half, prompting a Brad Brownell timeout.

Clemson took a 25-24 lead into halftime after Filer nailed a wing three and took a charge on the other end. A shot clock beating fallaway jumper by Adam Smith pulled the Hokies within one in the final 75 seconds.

The Hokies played a full-out zone to start the second half. After a wing three by Jarell Eddie – the only points of the game for Tech’s leading scorer – made it 31-28 for his team, the Tigers found energy on a huge swat at the basket by McDaniels that led to a tomahawk jam on the other end by 5-foot-11 Jordan Roper. But Tech scored the next five to take a 36-30 lead with 14 minutes left.

Clemson regrouped and put together a 10-0 run sparked by three-pointers from Harrison and Filer. The lead grew to 45-40 on another long ball from Hall, his second of the game. After Tech cut the lead to 46-43, McDaniels rattled in his first trifecta of the game just before the under-four timeout to give Clemson another six-point cushion.

Tech erased the six-point cushion and tied it at 49 on the baseline three by Emelogu, setting the stage for Filer’s heroics and Clemson’s defense.

The Tigers return to action Saturday against Wake Forest. The game will tip off at 4 p.m. in Littlejohn Coliseum. For ticket information, call 1-800-CLEMSON or visit ClemsonTigers.com.