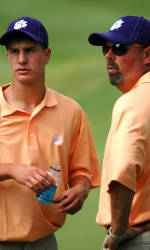 Clemson Golfers Move Up in Poll to 12th

Clemson, SC – In the latest Golf World Coaches Poll, Clemson is ranked 12th, up six spots from their previous ranking of 18th. Georgia moved up from fifth to take the top spot, followed closely by Charlotte and Alabama in second and third, respectively. There are seven ACC teams ranked in the poll, led by Georgia Tech at fifth and Duke at ninth as the only two in the top-10.

The Tigers most recently posted a second place finish at the Isleworth Collegiate in Windermere, FL, a tournament featuring 10 top-20 teams in an 18-team field. Tanner Ervin shot a final round 69 to help the team post a three-under par 285 on the final day to move up to second behind Georgia. Kyle Stanley led the team with a three-under par 213 to finish seventh, his second top-10 finish of the year and eighth in his career. Sophomore Sam Saunders also had a strong tournament, shooting a two-under par total of 214 for a tenth place finish, his best finish of the year.

Prior to the Isleworth Collegiate, the Tigers competed in The Brickyard in Macon, GA and finished second out of 13 teams, once again the runner-up to top-ranked Georgia. Sophomore Kyle Stanley posted another top-10 finish, shooting a seven-under par 209, his best score of the Fall.

For the now finished completed portion of the schedule, Tanner Ervin with a 73.11 average.

The Clemson golfers will return to action February 29, 2008 at the Puerto Rico Classic in Rio Mar, Puerto Rico.