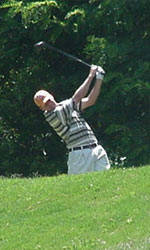 Clemson, SC – Coach Larry Penley and his Clemson golf team will travel to the Westin Rio Mar Beach Resort and Country Club in Puerto Rico this weekend to compete in the 2002 Puerto Rico Classic. Clemson will be one of 15 teams competing in the 54-hole event that will run Feb. 24-26. Purdue will play host school to the tournament that will be held at the River Course at Westin Rio Mar Country Club. The course is 6,945 yards long and a 72 par. Round one of the 2002 Puerto Rico Classic will be held on Sunday Feb. 24, rounds two and three will be held Monday and Tuesday.

D.J. Trahan, Gregg Jones, Matt Hendrix, Ben Duncan and Jack Ferguson will represent Clemson in the event. GolfWeek currently ranks Trahan as the number-one collegiate golfer. He had an amazing fall winning the Carpet Capital Classic and the Jerry Pate Intercollegiate. He finished second at the Ping/Golf Week, Long Cove Invitational and the Savane All-American.

Greg Jones had the second best stroke average in the fall with a 72.73 average and is a returning starter from last year’s team that finished second in the nation. Matt Hendrix had a very consistent fall, his score counted in all but one round he participated in. Ben Duncan will also be traveling to Puerto Rico. This will be his fourth tournament of the season and he is a veteran of 14 events in his Clemson career.

Sophomore Jack Ferguson will round out the Clemson team. Seven of his12 rounds in the fall were 75- or better and he was Clemson’s best player at The Ridges Tournament back in September.

The Tigers had an impressive fall and had four top four team finishes in their five events. The season started at the Ridges Intercollegiate in Johnson City, TN where the team finished in ninth place. The Tigers then played in the Ping/Golf Week Tournament in which they secured a first place performance. It marked the first time since 1990 that Clemson captured the Preview, the top college tournament of the fall.

D.J. Trahan then led the Tigers to a fourth-place finish by winning the Carpet Capital Classic in Dalton, GA. At the Jerry Pate Intercollegiate the team was once again led by Trahan who had a first-place score of 205 and 8-under. Clemson finished third as a team. The fall season was completed at the Long Cove Invitational where the Tigers had a third place finish.