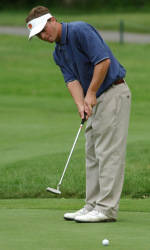 Alpharetta, GA – The Clemson golf team stands in first place after two rounds at the U.S. Collegiate Championship. The 13-team field played 36 holes Monday on the Lakeside Course at the Golf Club of Georgia. The Tigers are two-under par through two rounds, one shot ahead of both Florida and Wake Forest. Stephen Poole is tied for second in the individual race after posting a pair of 70s on Monday. All five of Clemson’s players rank in the top 20 after two rounds of play.

Leading the way for Clemson was senior Poole, who posted a two-under par 70 in the first round. The Spartanburg, SC native was actually four-under heading into his final hole, before a double bogey on the par five ninth hole dropped him to two-under. In the second round, Poole matched his 70 from the first round. He was a model of consistency, posting three birdies and just one bogey. It marked the first time this season he has shot 70 or better in consecutive rounds.

Tanner Ervin put together a solid opening round 74. He shot par on 15 holes and finished with a two-over score. He improved by four strokes and shot a 70 in the second round, his best single round since the second at Bulls Bay earlier this spring. The Mt. Pleasant, SC native fought off a double bogey on the eighth hole to finish that round at two-under par, thanks mostly in part to five birdies. Ervin is tied for 11th after two rounds at an even par total.

Brian Duncan, a second senior in the lineup this week, struggled with five bogeys in the first round. He shot 75, including a 38 on the front nine. He rebounded to shoot a 71 in the second round, despite bogeying two of his last five holes. He is tied for 18th heading into the final round.

David May, a freshman from New York, had a solid first round and was even par with a 72. He tallied four birdies and four bogeys in the opening round. His three-over 75 in the second round did not count toward Clemson’s team score.

Vince Hatfield, another freshman competing for Larry Penley’s team this week, had an up-and-down two rounds. In the opening round, he tallied five birdies and eight bogeys on his way to a 75. He improved by three strokes and shot even par in the second round. He posted six birdies and six bogeys to continue his hot-and-cold play throughout the afternoon.

The tournament will conclude with 18 holes on Tuesday.