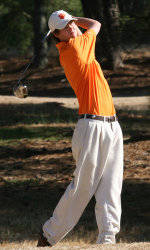 Clemson’s Luke Hopkins is a fifth-year senior on Larry Penley’s Tiger golf team this year, and he has confidently accepted his position as a team leader. The Tigers are ranked 18th in the latest Sagarin computer ranking and they await an NCAA Tournament bid on May 3.

Hopkins was a player Penley hoped would step up his game this year, as the Tigers lost four starters from the 2009 team. He has responded in his first full year as a starter with a 72.90 stroke average and four top 10 finishes, tied for the most on the Clemson team. He has 10 rounds under par this year, second on the team.

One of two seniors on the Clemson team along with classmate Ben Martin, Hopkins embraces his new role as team leader. “I remember what it was like as a freshman trying to work hard to get into the lineup,” said Hopkins, a native of nearby Greer, SC. “Now the hard work is paying off and you try to teach that to the younger guys. I appreciate the opportunity I have had this year and I am doing what I can to make the most of it.”

Hopkins was recruited by a lot of high profile schools coming out of Eastside High School. He played in the Canon Cup for the East team and was an honorable mention AJGA All-American. Georgia Tech, Florida State and Texas in addition to Clemson recruited Luke Hopkins.

“I came to Clemson mainly because of Coach Penley,” said Hopkins. “When he first came to see me play when I was in high school, I was nervous for some reason. But that all changed when I had the opportunity to sit down and talk to him about Clemson. He is a great guy, a great coach.”

The success of the program also had a lot to do with Hopkins decision to come to Clemson. The Tigers had won the NCAA Championship his sophomore year of high school and was the dominant program of college golf. “The success Clemson players have had on tour had a big effect. Seeing Lucas Glover and Jonathan Byrd, Charles Warren and D.J. Trahan have success on the PGA Tour told me you can get to the PGA Tour from Clemson.”

Hopkins entered Clemson in the fall of 2005 and he played in two tournaments that year, including a top 25 finish at the Augusta State Invitational when he played as an individual. He sat out the 2006-07 season, then had an outstanding summer of 2007 when he was the only member of the Clemson team to win two tournaments. He won the South Carolina Amateur with a 276, including a second round 65, and the Palmetto Amateur.

He played in six events in 2007-08 and helped the Tigers finish fifth in the nation. Last year, he became a starter late in the season and keyed Clemson’s greatest comeback in history at the United States Collegiate. The Tigers overcame a 13-shot deficit in the final round to win that tournament. His final round 71 contributed to that. He then finished 27th at the NCAA Northeast Regional, second best among Tiger golfers at that event.

“Luke set the tone for our come back win at the United States Collegiate,” said Penley. “He got off to a great start with a 31 on the front nine and that got everyone excited. When he finished his first nine we had moved from sixth to second and gave the guys the feeling they had a chance to win.”

This year, the All-ACC candidate has had many highlights. He finished 10th at the Brickyard, thanks to a second round 69, and he finished 13th at Isleworth, Clemson’s top performer at that national tournament in Windermere, FL. He finished the fall as Clemson’s best player in terms of stroke average.

Hopkins has continued his fine play in he spring season. He tied for seventh with classmate Ben Martin at the Puerto Rico Classic, helping Clemson to a third-place finish in the 15-team field. He also finished eight at Furman and 10th at The Hootie. Overall, he has been Clemson’s top golfer in four tournaments and has been in the top three in eight of the 10 events.

Coming into this season, Hopkins had some personal goals. He wanted to finish in the top 100 of the Sagarin rankings and he is on pace to do that with a #88 ranking through the ACC Tournament. He also wanted to win a tournament. While he has not done that, he does have those four top 10s, tied for the best on the team.

From a team standpoint, Hopkins knows this team is capable of a high national finish. “We always want to be in position to win and we feel we have the talent to do that in any tournament we enter. We have a young, but talented team.”

Clemson was disappointed with its sixth place finish at the ACC Tournament in April 25. But the Tigers have had five top four finishes this spring and are certainly capable of making an NCAA run.

Leadership and consistent play by senior Luke Hopkins will be a key to that run.