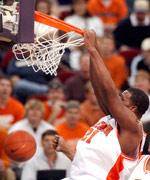 Clemson Gets Past Gardner-Webb 71-61

ANDERSON, SC – Clemson used second-half runs of 10-1 and 10-0 to pull away from Gardner-Webb and secure a 71-61 victory Saturday night at the Civic Center of Anderson. Clemson made 17 of its 33 shot attempts in the second half to improve to 5-0, its best start since the 1995-96 season.

“We’re just taking it one game at a time this year and we aren’t overlooking anybody,” said Tiger point guard Ed Scott. “In the past we would come out weak against teams like Gardner-Webb. They have some great shooters, and that would give us problems. They came out and made shots early but we adjusted.”

Three Tigers scored in double figures, led by Scott’s 17 points. Ray Henderson scored 14 and Chey Christie chipped in 13. Otis Daniels scored 15 points for Gardner-Webb, which dropped to 1-5 on the season.

Gardner-Webb took a two-point halftime lead thanks to its perimeter shooting. The Bulldogs hit 7-16 three-point attempts in the first half, including three by Chris Wiggins. Clemson, playing its first game in a week due to exams, shot only 32 percent from the field and 43 percent from the foul line in the half.

The margined stayed in single digits until Clemson went on a 10-0 run with under nine minutes remaining as until. Olu Babalola hit a jump shot from the top off the key, made a steal on the defensive end, and went the length of the court for a runner.

Gardner-Webb called a timeout to slow the game down, but the Tiger run continued. After committing an offensive foul, Henderson forced a turnover and then scored six straight points off of two free throws, a jumper and a putback that gave Clemson its biggest lead at 63-46.

“I thought Henderson turned the game around for us,” said Shyatt. “He showed some emotion and it inspired the team to play with emotion. Sometimes we show more in practice that we do in games, but I’m glad Ray showed some tonight.”

Meanwhile, the Gardner-Webb shooters went cold. The Bulldogs went just 2-15 from three-point range and shot just 30 percent in the second half. They trimmed the lead to 70-61 with a minute remaining, but would get no closer.

“Our runs should come from defense, rebounding and the [fast] break, and I think our players know that,” said Shyatt.