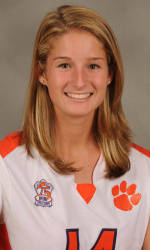 GREENSBORO, NC – Clemson freshman Natalie Patzin ahs been named to the 2009 ACC All-Academic Volleyball team, as announced by the Atlantic Coast Conference on Tuesday. Patzin, a native of Naperville, Ill. has a 4.0 in biological sciences.

To qualify for selection to the ACC All-Academic team, student-athletes must have earned a 3.0 grade-point average during the fall semester and have maintained a 3.0 GPA for their careers.

Patzin is the fourth-ever Tiger to be named to the Academic team, and the first since 2007; the award started in 2005.

Patzin was a valuable contributor during Clemson’s 23-10 season in which the Tigers made their third consecutive NCAA appearance. She played in 117 of 125 total sets, and registered 287 kills, third on the team. Her 2.45 kills/set average was also third on the team and she recorded 228 digs, 40 total blocks and 19 aces in her freshman campaign.