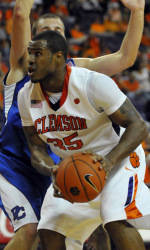 It is difficult to imagine standing 6’7″, weighing 240 pounds, and being labeled “undersized.” But this is exactly the moniker forward Trevor Booker will try to overcome when the Tiger basketball team takes the court for the first time on Friday against Presbyterian.

In what may have been his most important offseason to date, Booker stayed active over the summer as he continued to improve all facets of his game. It is an important time for Booker, because by June, he will be a legitimate candidate to become Clemson’s first player taken in the NBA draft since Will Solomon in 2001.

The bulk of Booker’s time was spent training with and playing for Team USA at the 2009 World University Games in Belgrade, Serbia. In June, Booker participated in the team trials at the U.S. Olympic Training Center in Colorado Springs, CO. He stood out during the tryouts and was named to the 12-man roster, becoming the fourth Tiger in history named to the team. His effort was enough to make a lasting impression on ESPN.com senior writer Andy Katz, who raved about Booker’s play during the trials.

“I feel like I played pretty well,” said Booker, a preseason candidate for the Wooden Award. “I held my own against the other post players and did what I could to make the team.”

Booker went on to play all seven contests for Team USA from July 3-11, averaging 6.1 points and 4.3 rebounds per game for the balanced squad. He also led the bronze medal team in blocked shots (8) and shot 55 percent from the field. His best game was against South Korea when he posted 11 points and seven rebounds.

His most important contributions to the team, however, came from the free-throw line in a July 7 showdown against host Serbia. With Team USA clinging to a 67-66 lead, the Americans missed five consecutive free throws in the game’s final 30 seconds. Booker successfully tipped out two offensive rebounds off missed free throws in the final 12 seconds to help secure the victory in a hostile environment.

“It was probably the craziest game I’ve ever been a part of,” said Booker. “Everybody was against us. We had opportunities to put it away, but we missed all those free throws. After we beat Serbia, the crowd started throwing stuff at us. We had to run off the court straight into the locker room.”

Booker is sure to see his share of animosity from opposing crowds this season as he becomes the focal point for the Tiger offense and one of the most feared post players in the ACC. The 2008-09 season became a breakout campaign for the Whitmire, SC native. He was a Second-Team All-ACC selection after leading the conference in rebounds per game (9.7) and field-goal percentage (57.1). He also led the Tigers in scoring at 15.3 points per game.

Katz believes big things are in store for the Tigers’ power forward during his senior season. “He seemed to be a man among boys at the trials. Booker should be the premier enforcer in the ACC this season. He might not be the most finesse player, but he should be able to get to the boards at will.”

Booker acknowledged the number of NBA scouts that not only witnessed his play at the USA Basketball trials, but also throughout the summer as he worked at different camps. Prior to his time in Serbia, he relocated to Las Vegas and trained at Impact Basketball. But his best showcase may have come after the international trip when he worked as a college counselor at adidas Nations, an elite basketball camp in Dallas, TX.

“There were probably 30 NBA scouts there,” Booker said of his adidas experience. “I had one day where I did everything…blocked some shots, hit NBA range three-pointers.”

Booker knows he will have a huge target on his back from every opponent the Tigers will face this season. However, he is up to the challenge and says he can draw from his experience over the summer, particularly the trip to Serbia with Team USA.

“I learned to stay humble and keep working hard,” said Booker. “I’m going to try to bring that mindset back here and let all my teammates know that we have to work extra hard to accomplish our goals. Two years ago, we made it to the ACC Championship game. One of our goals is to get back there, and win it this time. We’re also looking to make a deep run in the NCAA Tournament as well.”

To accomplish those lofty goals, Booker will have to provide leadership to a promising group of young players. And in the process, he will look to continue his development as a player in order to work his way up the 2010 NBA draft projections.

Booker, who Katz believes could develop into a Craig Smith (Boston College) type player in the pros, is forecasted as a first-rounder on early mock drafts by both DraftExpress.com and NBADraft.net. Should his dream of playing in the NBA become a reality, odds are he will point to the hard work he put in during the summer of 2009 to overcome the “undersized” label as the reason why.

Philip Sikes is an Associate Sports Information Director in his sixth year at Clemson.