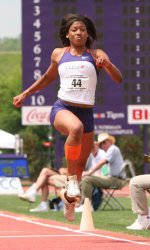 Patricia Mamona had an uncharacteristic experience competing in the triple jump this past June in Eugene, OR at the NCAA Outdoor Championships. With an individual national title in the bag, the typically-reserved Mamona asked the crowd for a “slow clap” as she approached her final jump.

“I usually don’t do that, but the atmosphere was so great and I was feeling very enthusiastic,” she admitted.

The knowledgeable and passionate fans in attendance at Oregon’s historic Hayward Field obliged her request. With support pouring in, Mamona hit the board and surpassed 14 meters for the first time in her outstanding career. Her official mark was a school-record 14.01 meters, or a quarter of an inch shy of 46 feet.

Mamona’s national championship was the eighth in Clemson women’s track & field history. It was the pinnacle of an outstanding season in which she earned a pair of All-America awards and played an integral role in leading the Tiger women’s team to its first-ever sweep of the ACC indoor and outdoor titles. She was the ACC’s Outdoor Field Athlete Performer-of-the-Year and an ESPN the Magazine Third-Team Academic All-American as well.

In many ways, Mamona’s individual performance mirrored that of Clemson’s team success in 2010.

It began in February, when the Tiger women took the conference by surprise and won their first ACC indoor title since 1992. Clemson went on to tie for seventh at the NCAA meet, its best finish in nine years. Mamona was one of the key contributors, as she finished as the ACC and NCAA runner-up in the triple jump. Having made multiple trips to the NCAA Championships, simply earning All-America status for the first time did wonders for her confidence.

“It served as great motivation,” said Mamona. “Being runner-up with a good mark was a sign that something great was about to happen.”

Great things certainly ensued during the outdoor season for both Mamona and the women’s program. She was again ACC runner-up in the triple jump, while also placing third in the heptathlon. The Tigers gained their first sweep of the ACC team championships after once again routing the competition, this time as the host school of the conference outdoor meet in April.

Mamona’s unselfish nature was on display at both ACC Championship meets in 2010. She put aside her primary focus (triple jump) for the betterment of the team, as she also competed in the multi-events, high hurdles, and long jump. According to Clemson Director of Track & Field Lawrence Johnson, her unselfishness was simply a reflection of the humility and character she displays at practice on a daily basis.

“She’s not a vocal leader, but one that leads by example,” stated Johnson. “She amazes me each and every day. She sets a tremendous example to our younger student-athletes. It will be difficult to replace her down the road; I wish she could stay here at Clemson forever. She carries a big stick for our program and we’re fortunate to have her here.”

Following her national championship performance, Mamona did not get much of a chance to reflect and celebrate her accomplishment. She flew back from Oregon to Charlotte, NC with her coaches and teammates, who then caught a bus to Clemson. There, she hitched a ride with friends to the Atlanta airport, where she had to catch a flight the same day for London, England.

After spending a brief period of time with her parents, who relocated to England from their native Portugal, she was on a flight to Hungary to catch up with her national team in preparation for the European Track & Field Championships. It was an exhausting time for Mamona, but one that showed her a realistic glimpse of what competing as a professional may hold one day.

“When I competed at Barcelona, I was shaking at first,” she said. “My first two jumps weren’t very good. I had one final jump to make it to the next round, so I asked for the support of the fans. I didn’t think it would be a good jump, because I was way behind the board on my takeoff. When I saw 14.12 (meters) pop up on the screen, it was a great moment.”

Mamona placed eighth at the European Championships in the triple jump while competing against some of the best athletes in the world as one of the youngest athletes at the meet. She hopes it serves as a big boost to her senior season at Clemson, where she has one outdoor season of eligibility remaining.

Her primary goal for 2010-11 is to repeat as the NCAA outdoor champion, but she also strives for her ever-elusive first ACC individual title. Both appear to be well within her grasp. A health science major, Mamona is on track to graduate in May. She hopes to compete professionally in the United States while working towards a future in the medical field.

She is quick to deflect credit to Johnson and his staff, as well as her Portuguese coach Jose Uva, for her ascension as one of the NCAA’s top track & field athletes. If her career continues to progress at the rate it has the past four years, perhaps Patricia Mamona should start giving herself a little bit of the credit.