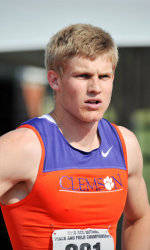 When Miller Moss enrolled at Clemson in the fall of 2006, the track & field coaches told him he had the potential to be an All-American in the decathlon. It sounded like a great plan to the Sumter, SC native and former SCISA standout at Wilson Hall.

There was one small problem. He had no idea how to hurdle, high jump, pole vault, or do all the throws required, key requisites in completing a successful decathlon.

“I came in with the hopes of advancing to national meets and being an All-American, but I had no concept of whether that was realistic or not,” he said. “I was bad at all those events, so I red-shirted my first year to learn how to do all those things. There were days I was frustrated, but I received encouragement from teammates who came to Clemson in the same situation.”

Frustration quickly gave way to progress, however. Moss competed at the USA Junior Championships in June of 2007, where he produced a seventh-place finish in the decathlon. As a red-shirt freshman, he continued to show growth after finishing second at the ACC Outdoor Championships with 6,991 points. His sophomore year, the point total increased to 7,323 as he qualified for the NCAA Championships for the first time in his career.

The 2009-10 campaign proved to be a breakout season for Moss in the multi-events. He broke Clemson’s record in the heptathlon indoors and followed an ACC runner-up showing with his first All-America performance. He placed eighth in the event and moved into scoring position after the final event.

“That was a huge confidence boost,” Moss said of his first All-America honor. “I was pretty far back heading into the last event, the 1,000 meters. To be on the podium as a scorer and All-American in only my second national competition was a great experience.”

Everything was starting to come together as he approached the ACC Outdoor Championships in April. He performed well in front of family and friends at Clemson’s Rock Norman Track, breaking Andy Giesler’s school record with 7,628 points and another runner-up finish.

He took his momentum to Eugene, OR for the national outdoor meet and stood third in the standings after an impressive opening day. He came out with a solid time in the high hurdles, the sixth event, but hit a snag in the discus. He fouled on his first two attempts. Needing a legal mark on his third throw to stay in the running for the national title, Moss did not hold anything back as he released the discus. He was flagged for a third foul, ending his chance of a high national finish.

Disappointed, Moss returned to work at Clemson the next week in preparation for the USA Outdoor Championships, which were held only two weeks later in Des Moines, IA.

“Coming back two weeks after a decathlon is tough,” admitted Moss. “I was in peak shape for Oregon. After I ran the first event in Des Moines, I was tired and didn’t know how I was going to complete it.”

Nevertheless, Moss mustered the strength to move on and wound up finishing fourth against a mixed field of college and professional standouts. He was consistent in that he scored 7,614 points, just 14 shy of his school-record total from the ACC meet. His performance was enough to earn a spot on the United States roster for the prestigious Thorpe Cup, a multi-event competition versus Germany held each August.

As the youngest competitor in the field, Moss scored 7,606 points for Team USA in the meet held in Marburg, Germany. It was an experience he will never forget.

“The meet was incredible and the crowd was great,” he recalled. “During the pole vault and high jump, they would crowd around us to watch. I had to pinch myself, because I would look around and see castles that were thousands of years old. It was an eye-opening experience to know that I could potentially do this post-collegiately.”

As Moss embarks on his final season in a Clemson uniform, he has multiple goals he would like to achieve. Surpassing the 8,000-point total in the decathlon is atop his list. Winning an individual and ACC team title is also a strong desire. In addition, with the graduation of Oregon superstar Ashton Eaton, the decathlon will be a wide-open competition at the NCAA Championships.

“There are probably five or six guys who can win the national championship,” he said. “I need to make improvements on my second-day events, primarily the high hurdles, discus, pole vault, and javelin. I’ve gotten better, but I want to keep progressing in all the events.”

Clemson Director of Track & Field Lawrence Johnson believes the ability Moss showed in overcoming the disappointment at the 2010 NCAA national meet should go a long way in making his goals a reality.

“He’s primed to do some special things his senior season,” said Johnson. “He has focused in on becoming much better at the technical events. I’ve seen so much growth in him the two years I’ve been at Clemson. He could be an 8,000-point guy…he’s one of those guys where the sky is truly the limit.”