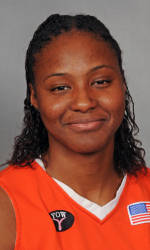 Clemson is very fortunate in basketball this season. The team features an All-ACC player who was also named to the All-ACC Defensive team. The player, who hails from the Palmetto State, led the team in scoring (16.2) and rebounding (8.4) last season. The self-proclaimed “competitor” is one of only 10 players in school history to total more than 1,000 points and 600 rebounds, and this roundballer could end up in the top five in scoring in school history.

Lele Hardy’s career has coincided with Tiger men’s basketball player Trevor Booker, who has deservedly received praise for his elite level of play and prospects as a professional player. Maybe it is time for Hardy to start drawing the same comparisons. Their career scoring averages (12.2 for Hardy, 12.1 for Booker) are nearly identical, as are their career rebounding numbers (7.8 for Booker, 7.5 for Hardy), and they each have career highs of 32 points and more than 15 rebounds.

Now in her senior year, Hardy is anxious to bring the Lady Tigers to a postseason tournament.

“The unfinished business that we had from last year is a lot of our motivation this year,” said Hardy. “Sitting down and watching the team so far in the preseason, I think that we’ve made the stride to go to the NIT or NCAA. I think we’ll be a better all-around team, better defensively, and better scoring.”

Hardy came to Clemson in 2006-07 after a standout career at Spartanburg (SC) High School. She started every game as a freshman, averaging 11.6 points and 6.9 rebounds per contest.

In her sophomore season, Hardy had a down year by her standards, managing only 8.8 points and 7.0 rebounds per game, and shooting only 17 percent from three-point range. She used that as determination for her junior season, when she started out on a tear for the Lady Tigers.

“It came from working hard in the season, preseason, and during the summer, and getting in extra work to get where I wanted to be.”

She rebounded in her junior campaign, averaging more than 16 points per game despite drawing the opponents’ best defender almost every contest. Her versatility as a scorer has helped her to excel in a system built around her. She was a Third-Team All-ACC selection.

“She came here as a great athlete,” said Head Coach Cristy McKinney. “I think with the staff, she’s done a great job of letting us coach her and learning to use her athleticism while becoming a much more skilled basketball player. Offensively, her ability to shoot the three really opened things up for her and that came through a lot of hard work from her and our staff. She has developed to compete amongst the best. I’d like to see her get drafted into the WNBA this year. I think she has all of the tools to do that. That’s why we are always pushing her to be better.

Hardy added a reliable three-point shot to her repertoire last season, making 33 percent of her 119 attempts, which opened things up for her off the dribble. She has an explosive first step and is extremely strong around the rim, often elevating well above taller defenders. She can score in a variety of ways, as she excels in transition and has a consistent pull-up jump shot.

Perhaps her most dramatic play came last season in the ACC/Big Ten Challenge against Northwestern in Littlejohn Coliseum. With Clemson trailing by three points with less than three seconds left in the game, Hardy took the inbounds pass and raced toward the goal, avoided several defenders, and heaved a shot from just inside halfcourt. The shot fell, sending the game into overtime in what became the ACC’s clinching victory in the Challenge, as Clemson prevailed by a score of 78-75.

But her offensive prowess is not her favorite part of the game. “Most of the time when I get the ball, I’m not looking to score. I don’t really like offense. I love defense. I like getting steals and rebounding. I love rebounding, even though I’m 5’10”. If there’s a spot or somewhere I can get to offensively, then I take it. Defensively, I want the ball all the time, whatever I have to do to get it.”

This season, Hardy needs to hone her leadership skills as the Tigers try and navigate a schedule that features 15 postseason teams from a season ago, including defending National Champion Connecticut. She has gained a new appreciation for what she needs to bring to this season’s team, which returns 81 percent of its scoring and 86 percent of its rebounding.

Hardy is remarkably shy off the court, but she has an unmistakable confidence about her. For as accomplished as she is, she is admittedly oblivious to many of the marks that she is passing, attributing her success to her teammates.

“I’m looking forward to it,” said Hardy. “I love the challenge and playing against the best. We are going to see some of the best players in the nation this year, and I can’t wait.”

Hardy is making her last hurrah in Tigertown this season as one of the greatest players to ever put on a Lady Tiger uniform.

Jeff Kallin is an Assistant Sports Information Director in his first year at that position at Clemson. He previously worked as a graduate assistant at Clemson for two years.