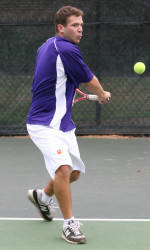 If there is any proof needed that hard work and dedication pays off, Clemson men’s tennis player Kevin Galloway is a walking example.

Having started playing tennis at an early age and working hard in the weightroom during the offseason has definitely paid large dividends for the Charlotte, NC native.

“I got my start in tennis because my parents loved to play,” he said. “My father played basketball at Appalachian State and my mom played tennis in high school. They loved playing tennis and they got me started when I was five. I started playing in tournaments at the age of eight.”

Clemson’s tennis tradition had a lot to do with Galloway coming to Clemson. In fact, he shares the same hometown with one of the Tigers’ greatest former players, Pender Murphy, who was recently inducted into the Clemson Athletic Hall of Fame.

“I was first noticed by Coach Chuck Kriese (longtime former Clemson head coach who retired two years ago), because I was hitting with Pender Murphy. Murphy contacted Coach Kriese and he was very interested in me. It came down to Clemson or N.C. State, but I thought Coach Kriese wanted me more, so I chose Clemson.”

Before Clemson, Galloway had impressive credentials. He was ranked as high as #1 in the South in the junior ranks. He graduated from Hickory Grove Baptist Christian School. Although it did not field a tennis team, he played baseball for the school and in local tennis tournaments as he worked his way to the top.

“Ever since the ninth grade, I had a coach named Mike Conroy who helped me, and I owe him a great amount of gratitude,” explained Galloway. “When I go home for the holidays, he still helps me. I appreciate Coach Kriese for giving me the opportunity to play here. I also thank Coach Chuck McCuen for helping and guiding me the last three seasons. It’s great playing for Coach McCuen.”

Clemson made a strong impression on Galloway from the outset, especially during his official visit. “I remember my official visit at Clemson very well. I came to a men’s basketball game and the atmosphere was exciting and electrifying. I fell in love with the place. I knew this was the place for me.

“The facilities are great and the coaches are wonderful. I couldn’t have asked for a better situation when choosing a college. I like the team members and I was impressed with the well-known Clemson tennis legacy.

“I had a good friend in Ike Belk, who played here. He enjoyed Clemson as well. All the people and tennis team members were nice, and I was impressed with the academics and the school’s reputation.”

Galloway has been named Academic All-ACC and to the ACC Academic Honor Roll, prestigious honors and an example that he has his priorities in line.

As for future plans, Galloway hopes to have a career in professional tennis before taking advantage of his Clemson degree.

“I hope to play tennis as long as I can and I hope to play professionally after I leave Clemson,” said Galloway. “I will receive my financial management degree next December, and after tennis, I hope to be able to work in Charlotte for one of the large banks there.”

McCuen is pleased that Galloway in on the squad. He enjoys coaching the young man and watching him develop into a quality citizen and student-athlete.

“Kevin has a great attitude, and this quality along with his willingness to work hard makes him an exceptional student-athlete,” said McCuen. “He is very strong in the classroom and he loves to compete. His competitive spirit in both practice and in matches makes him a great player.”

“We’re looking good this fall as a team,” added Galloway. “Everyone is playing great, and I think it’s going to be an exciting year for us. I can’t wait.”