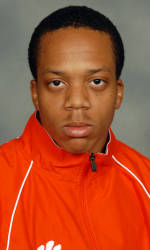 The sprinters on the Tiger track & field team have had a long tradition of excellence. Tye Hill, C.J. Spiller, and others have helped make a name for the standard that is Clemson track.

One of the new, up-and-coming faces in that tradition is sophomore sprinter Justin Murdock. With a successful freshman campaign under his belt, there are only bigger and better things to come.

At Meade High School near Baltimore, MD, Murdock was a five-time All-American who was named a U.S. Track & Field All-American as well as a USA Today All-American. He participated in the longer sprint of 400m and was the AAA state champion in the event along with the 4x400m relay.

The 2007 Nike Indoor Nationals also saw him garner All-America status with a fourth-place finish in the 60m. He holds the Maryland state record in the 55m with a time of 6.21 and earned all-state honors as a senior in the 100m and 200m dashes.

Murdock finished fifth at the 2008 USA Junior Championships. Thanks to that finish, he traveled to Poland for the World Championships in the summer after his senior year as a 100m alternate on the USA Junior National squad.

“I didn’t get to run, but I was an alternate for the 4×100 relay because I had finished fifth at Junior Nationals by one one-hundredth of a second, so they took me out there with them,” recalled Murdock. “The experience was great.”

The 5-10 junior chose Clemson over Florida State, Louisiana State, Tennessee, and Texas-El Paso, all strong track programs. His first year in Tigertown was also the first year for Director of Track & Field Lawrence Johnson, so Murdock’s future was uncertain at first.

That chance has already produced tangible success. In his debut season with Clemson, Murdock was a provisional NCAA qualifier in the 60m during the indoor season. He suffered a hamstring injury that hindered his indoor campaign, but he still posted a 60m time of 6.72 and finished fifth at the very competitive ACC Championships. His top 200m indoor time was 22.03.

Murdock’s favorite race is the 100m because it is not too long of a distance. “I don’t like long running, period. I think the 100m dash is best for me because I’m not that strong altogether, but I have good acceleration.”

The 2009 outdoor track season saw Murdock excel in that very race. He received an at-large bid to nationals in the event. His personal best in the 100m is 10.30, a time he posted at the Orange & Purple Classic.

Clemson qualified for the NCAA Championships in the 4x100m relay with a team made up of Murdock running the lead leg, followed by Spiller, Guy, and Ford. That relay posted a school-record time of 38.77 in the national finals to finish third in the nation and give Murdock All-America honors.

Being on a team with such seasoned teammates has really helped Murdock develop into an even stronger runner. “I’ve learned to work hard. Everyone out there is fast. It’s not like high school when you are by yourself and you can mess around. If you miss one rep in the weightroom and one of your teammates puts in the extra work, they’re going to be that much better than you.

“To me, college track is a complete difference because high school was pretty tough, but practice-wise, you can’t touch college. We lift weights almost every day and the workouts are harder.”

Another motivator for Murdock is keeping up with Ford and Spiller, who are dedicated to football but are also able to stand out on the track. He admits that they present tough competition, but they also help him improve.

With the adjustments Murdock has made to collegiate track, that goal is very possible. Other honors of this past season include All-East Region in the 100m, NCAA East Region champion as part of the 4x100m relay team, and a USTFCCCA All-America accolade for the relay.

Murdock has an experienced coaching staff behind him who is capable of taking him to that next level. This season, he just hopes to improve upon his freshman campaign. With all that he has accomplished in just one season, he is moving toward a promising career in Tigertown.