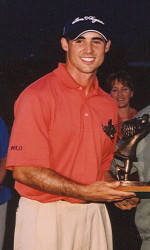 It has been quite a year and a few days for Jonathan Byrd. It started with an incredible hole-in-one to win a PGA Tour event in Las Vegas and concludes today with his induction into the Clemson Ring of Honor. It doesn’t get much better than that.

On October 21, 2010, Byrd was struggling to make the top 125 on the PGA Tour money list and earn his PGA Tour card for the 2011 season. On October 24, 2010, he made the shot heard around the golf world when he made a hole-in-one on the fourth playoff hole in near darkness to win the Justin Timberlake Shriners Hospital for Children Open. It marked the first time in the history of the PGA Tour that a player won a tournament with a hole-in-one, nevermind it being in a playoff. That victory clinched Byrd’s PGA Tour card for 2011 and 2012.

So how did Byrd start his 2011 season? All he did was win the Hyundai Tournament of Champions in Hawaii with a 24-under-par score in another playoff. Although the events were two months apart, that gave Byrd wins in consecutive tournaments, and both were in playoffs.

By the end of the 2011 PGA Tour season, he had won a personal-best $2,938,920 and finished #22 on the money list, the second-best finish by any former Clemson golfer in a season and the best among former Tigers in 2011. He made 17 cuts in 26 events, including the first-place finish at the Hyundai Tournament of Champions and second-place finish at the Wells Fargo Championship in Charlotte.

He actually tied former Tiger teammate Lucas Glover at the end of regulation, but lost in a playoff in what must be considered the greatest day of publicity for Clemson golf in history.

The year ended with a phone call from yours truly that informed him that he had been elected to the Clemson Ring of Honor.

“This is a great honor,” said Byrd. “To be in the same class as Frank Howard, Banks McFadden, Jeff Davis, Barbara Kennedy…that is very meaningful. I am humbled. This has great meaning to me, because Clemson has been such a big part of my life.

“I can’t thank everyone in the Clemson Family enough, especially Coach (Larry) Penley, who has had such a positive impact on my life.”

Byrd enrolled at Clemson on a golf scholarship in the fall of 1996, and it did not take him long to have an impact on the program. A starter from just about day one, he helped elevate it to a consistent top-10 program. It is not a surprise that Clemson putting four straight top-10 finishes together coincided with Byrd’s four years in Tigertown.

“We finished in the top 10 all four years he was at Clemson, including a third-place finish in 1997 and second-place finish in 1998,” said Penley. “He won the Puerto Rico Classic in the first tournament of the spring of his freshman year. That was huge for us and huge for the program going forward.”

The next season, Clemson improved to second in the nation, losing by just three shots to UNLV at the NCAA Championships at New Mexico State. Byrd was named honorable mention All-American that year.

In 1999-00, he led the Tigers to a third ACC Championship in four years by shooting a 67 in the final round at the Old North State Club. He finished fourth overall and was named First-Team All-ACC, honorable mention All-American, and Academic All-American. Clemson then closed the year with a fourth straight top-10 team finish.

“We made a significant move forward nationally when he was at Clemson, finishing in the top 10 every year,” stated Penley. “He set a high standard of excellence on and off the course, because he was a two-time Academic All-American in the years he was an All-American on the course. He and Kyle Young, who was in school at the same time, are the only Clemson athletes to do that twice. That says something.”

There are many reasons Byrd had such an outstanding career at Clemson on the course and in the classroom, but his biggest asset was his family support system. First, there was his brother, Jordan, now the associate head coach under Penley at Clemson. Jordan was three years ahead of Jonathan as a college golfer at Furman, as he was a trailblazer as to the proper way to do things on the course and in the classroom.

Then there were his parents, Jim and Jo Byrd. They were very supportive, for starters. I personally walked a lot of holes with Mr. and Mrs. Byrd, and there could not be two finer parents. Jim was a college athlete himself as a football player at North Carolina in the early 1960s.

If you want to know where the Tiger standout gets his mental toughness, just remember this story. At the opening kickoff of the 1965 North Carolina vs. Notre Dame game in South Bend, Byrd’s father suffered a broken nose after he was tackled. However, he got bandaged up and played the rest of the game with that broken nose.

Now, Byrd continues that success professionally thanks to the support of his wife, Amanda, and their two children, Jackson and Caroline.

Amanda provided more than the normal support for Byrd when he won his first PGA Tour event in 2002, a big reason he was named PGA Tour Rookie-of-the-Year. It was just a few weeks before the couple was scheduled to be married, and Byrd was playing in the Buick Challenge in Callaway Gardens, GA. While playing the seventh hole in the first round, Byrd hit an errant tee shot.

“It headed for the left trees and just happened to hit me on the shoulder, taking my breath away,” said Amanda. “The ball seemed to get a better bounce towards the fairway and he made a birdie on that hole, which led him to his first PGA Tour win.”

Byrd has gone on to win five PGA Tour events, all with incredible low scores. He has won the five events with an average score of 22-under par. Just 10 years into his career, he has already won nearly $15 million.

Byrd’s victory total, more than any other former Tiger on the PGA Tour, is no surprise to Penley, who continues to benefit from his former player’s success.

“Jonathan’s induction into the Clemson Ring of Honor is well deserved and shows how much he has meant to this program over the years, not just the time when he played. We still use the same practice drills in the short-game area and putting that he used when he played here. Many of his accomplishments have yet to be duplicated when it comes to on the course and in the classroom.

“And, the way he handles himself today on the PGA Tour, he is the consummate professional and is someone our current players look up to. Our players aspire to be like him as an all-around student-athlete. He is the standard.”