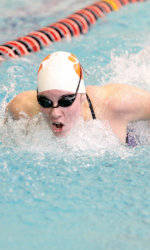 The first football game of every new season is a fresh reminder of the persuasive power that exists in the hills surrounding Clemson University. Senior swimmer Elizabeth Savage is a prime example of how that power works. The Irmo, SC native had original plans of leaving South Carolina after a decorated prep career at Dutch Fork High School, where she won five state titles. But the allure of Clemson was simply too much for her to ignore.

“During my first two years in high school, I was sure that I was going to attend college out of state,” she said. “But as I began doing the research and going through the process, Clemson really stood out as a school that had everything I wanted…great academics, a great engineering program, and a great swimming program that fit the kind of swimmer that I was.

“Being two hours from home was the perfect distance. After coming here for my recruiting visit, I realized that no other school that I went to was able to live up to the experience I had here. It really does feel like a family, and that was something unique.”

Savage will head into the 2010-11 season as one of the leaders on a young squad. She has competed at the ACC Championships in each of her first three years and is looking forward to stepping up as one of a host of athletes who will take the reins of the program this season.

“Just being on this team for the last three years has been a great opportunity to watch the leadership styles of the older swimmers that came before me,” said Savage. “The biggest thing that stood out to me was that people led by example rather than just by what they said. We’re really privileged to have a lot of people, not just seniors, that are leaders on this team.”

All signs point to a successful season for the Tigers according to Savage. The veteran has been pleased with the work ethic and dedication that she has seen from her teammates in the offseason and believes that the group is as focused as any she has been a part of during her Clemson career.

“I think the team has made great strides this offseason,” added Savage. “A lot of people were really dedicated and trained on their own.

“Everyone came back recommitted and ready to be back together in Clemson. Now we’re training together and ready to see what happens.”

Savage specializes in the breaststroke and individual medleys for the Tigers. She describes the breaststroke as a work in progress, especially since her high school career when it was her least-favorite stroke to perform.

But her coaches, both in high school and her swimming club, pushed her to excel in the breaststroke, and Savage continued to tweak her form until she saw her times dramatically drop. Now, Savage enjoys the breaststroke and understands what it takes to be successful in each heat.

“For me, it’s really important to relax and trust my training and my coaches,” she said. “Obviously, it’s a race, it’s a competition. Something I’ve learned from 14 years of competition is that you can’t control what your competitor does. You can only control what you do.”

Perhaps Savage’s most outstanding quality is that she is an exemplary student. She comes from a family of engineers and is majoring in chemical engineering, not exactly a walk in the park. But Savage is not just getting through a difficult course load. Instead, she is excelling, with numerous academic honors to her credit. Savage takes pride in her studies and uses that to improve her prospects for employment after her swimming career is over.

“I came into it with a trial mentality to see if it worked, and if not, then I would do something else,” admitted Savage. “I got hooked on the program. It has a great deal of potential.

“It is also really difficult. Clemson provides a great support system, especially during your freshman year, as far as academics for athletes. I have been able to build strong study habits and have the support of the team as we train, because we are all doing the same things.”

Looking at the upcoming season and the potential of her team, Savage sees a lot of promise. There are a load of young and talented players who have entered the program who she says have brought energy to workouts and practices. Savage looks forward to using this season as a springboard to show those younger athletes the proper way to lead a program.

“This team is possibly one of the closest teams out of all the years I’ve been here at Clemson, because we’ve gone through a whole range of experiences together,” stated Savage. “Everyone who is here wants to be here. I expect our team to surprise people this year.”