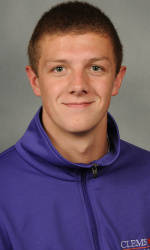 Competitiveness is a term often used to describe athletes, and there may not be a more fitting word for Clemson swimmer Chris Dart.

“I think my biggest strength is my competitiveness,” said Dart, a junior from Chatham, NJ. “I hate to lose. I like to think that I hate to lose more than anyone.”

Dart has been one of the strongest competitors for the Tigers during his two seasons in Tigertown. It did not all start as smoothly as he had hoped.

“I think being competitive was definitely my strength coming in, but at the same time it was my weakness because I was a `hothead.’ I was coming in expecting to win every event by a lot and I got really down on myself. The coaches here and the team do a really good job of supporting you when you have a bad swim or you can’t pull it through on the last relay.”

As Dart has matured as a swimmer, he has managed to make a huge impact on Clemson’s swimming program. During his freshman season, he swam his way into Clemson’s all-time top-10 list in three individual events and a relay. The team named him rookie-of-the-year and the most valuable swimmer.

As a sophomore, Dart continued to make a name for himself. He was one of the most consistent performers for the Tigers, as his versatility allowed him to compete in many different events, including the backstroke, freestyle, and individual medley.

Dart showed just how versatile he really is when he set a school record in the 200 IM with his time of 1:47.23 at the ACC Championships. Although this may be a career highlight for some, Dart’s highlight from his sophomore season came from a team effort.

“The highlight for me would have to be when the team beat South Carolina last year. That was a whole team effort and to beat our rival in our home pool with such a close-knit team was really special.”

Clemson’s swimming & diving squad is a close bunch, and that is one of the aspects that was important to Dart when picking a school. It was the family feel that was one of the driving factors for him choosing the Tigers.

“The thing I love most about Clemson is that this whole town is one big family. It is a gigantic family that stretches across the whole country.

“Coming from a small family, that aspect was really important to me when I was taking my recruiting trips. So when I came here and I saw how close the team was, that really made me excited. Then I saw how close the town was and how much support we get at swim meets. For a sport like swimming, it is pretty awesome. I have really enjoyed it so far.”

That closeness of the swimming program has only grown stronger and Dart believes that it could be an advantage for the Tigers this season. With the leadership returning and the talented group of newcomers, the bond that this team has can propel the team to success.

Dart, who has dual-citizenship in Great Britain and the United States, spent his summer training. He also competed in Europe, as his performance proved that he is ready for this season and he will be a strong competitor for the Tigers. He had three top-10 finishes at the British Gas ASA National Championships, as he took third in the 50 backstroke, fifth in the 100 backstroke, and eighth in the 200 individual medley. Dart will enter this season as one of the veterans on the team and is embracing his role as one of the many leaders.

“I try to lead by example by practicing hard, being competitive, and listening to the coaches,” explained the communications studies major. “You can lead in so many different ways, and I think that everyone on this team is a leader.”

This season will be all about the team goals for Dart. The squad is looking for a top-three finish in the ACC, and he believes that goal is within reach. There are some personal goals that he keeps in the back of his mind as well.

“I want to win every event this season. But also one of my best friends, Tom Recko, holds the 100 back record at Clemson, so to get that record would be really special to me.”