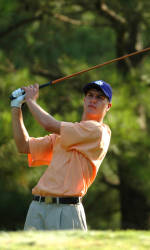 Clemson, SC – Phillip Mollica fired a four-under-par 68 to lead Clemson to a 285 team score during the second round of the NCAA West Regional at Gold Mountain Golf Club in Bremerton, WA. Clemson is in third place entering the final round, six shots behind leader Southern California.

The third and final round of the NCAA West Regional will take place on Saturday at the par 72 course that is an hour drive south of Seattle, Washington. Clemson is in good shape to make the 10-team cut. The Tigers are 14 shots ahead of the 10th place team. The top 10 teams will advance to the NCAA Championship at Purdue University May 28-31.

Clemson was the leader among the ACC teams at the event. North Carolina stands at 601, 21 shots behind Clemson entering the final round, while ACC Champion Florida State was at 609, 29 shots behind the Tigers.

It marked the fourth time this year the Anderson, SC junior had scored a career high tying 68. All have come during the spring season. Mollica, who won the North-South Amateur at Pinehurst this past July, has birdied 11 of the 18 holes over the two rounds. The only hole he has birdied both days has been the par three 249-yard 12th, the most difficult hole in the tournament so far over the first two rounds. His tee shot on Friday finished 12 inches from the pin and he tapped it in for an easy birdie.

Mollica’s eight-shot improvement from the first to the second round is the best improvement by a Clemson golfer in an NCAA regional since 2000 when D.J. Trahan improved from a first round 87 to a second round 74. For the second straight day, Mollica had a string of three consecutive birdies during the middle of his round. He birded the seventh, eighth and nine holes to finish the front nine in 33 on Friday. He got his score to five-under on the back, but made a bogey on the 16th hole coming in.

Mollica had help on Friday as Sam Saunders and Ben Martin both had even par scores. Saunders has been the most consistent Clemson golfer as he has shot rounds of 73 and 72 for the first two rounds. He has been Clemson’s second best golfer in each round. He has shot 36 in three of his four nine-hole segments and a 37 in the fourth. He had three birdies and three bogeys on Friday. He finished with a birdie on the 18th on Friday to shoot even par for the sixth time this year.

Martin, a sophomore from Greenwood, SC, got off to a rough start on Friday with two bogeys within his first three holes. But he came back with birdies on the fourth and sixth holes, then finished with a birdie on the 18th to shoot an even par 72. He had a 74 in the first round and was one of the four Clemson golfers to show improvement from the first round to the second round.

David May went from a 76 to a 73 on Friday and also saw his score count towards Clemson’s team score. May was two over after four holes, then birdied five and six to get back to even par. He pared the last five holes to finish at one over for the day.