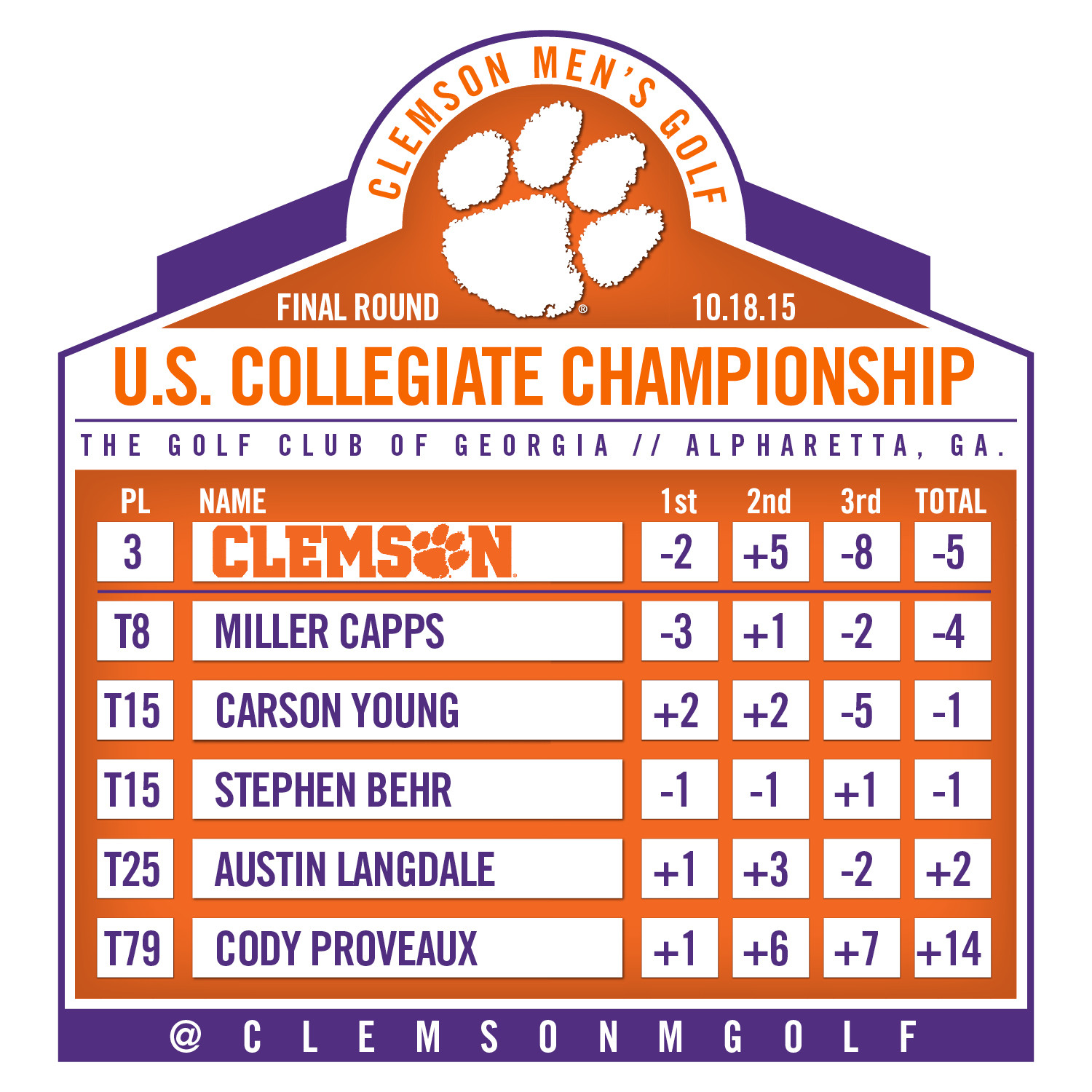 Clemson, S.C.—Carson Young chipped in from 70 feet for eagle on the final hole to complete a career best tying five-under-par 67 on Sunday and lead Clemson to a third-place finish at the 17-team U.S. Collegiate Championship at The Golf Club of Georgia in Alpharetta.  The tournament completed Clemson’s fall schedule.

“I am really pleased with the performance of the team this weekend, but especially today,” said Penley.  “We had a good weekend, especially in terms of putting and putting the ball in the fairway.  Miller Capps and Carson Young really did a good job today.  We made a lot of birdies this weekend.”  Penley’s observation was proven by the fact that Clemson made 49 birdies as a team, second only to Auburn, who had 55.

Clemson was No. 21 according to the Golfstat/Sagarin rankings entering the tournament, but certainly will move up the rankings in the final fall poll that will be released in November.

Auburn and Wake Forest were co-champions with scores of nine-under-par 855 for the 54 holes.  Clemson was third at 859.  That included a 280 team score today, not only the low score of the day, but the low team score of the tournament.   Florida State was fourth at 860.  Clemson defeated the Seminoles by four shots on the 18th hole on Sunday to jump into third place.  Florida State is ranked fourth by Golfstat, but is number-one by the Golf Coaches Association.

Young tied his career best round of 67 set at the Ka’anapali Classic in Hawaii last year.  His round included a five-under-par 31 on the front side when he had five birdies and four pars.  He finished with the eagle on the 18th hole, the second eagle of his Clemson career.

Young, a junior from Pendleton, shot in the 60s in four of his final six rounds of the fall.  He finished with a 215 total for the three days, good enough for 15th place.  His 67 on Sunday tied for the best round of the day among the 90 golfers in the field.

Miller Capps was Clemson’s top player for the weekend with a 212 score, four-under par.  The native of Denver, N.C. had rounds of 69-73-70 in finishing in eighth place.  He had three birdies and just one bogey on Sunday, and had 11 birdies for the tournament overall.

Austin Langdale, also from Pendleton, S.C., also had a 70 on Sunday and finished in a tie for 25th at 218.  The junior had three birdies in a row on the front side.  He was four-under-par on the par four holes for the weekend, second best in the entire field.

Stephen Behr had a one-over-par 73 on Sunday, but the graduate student was under par for the weekend with a 215 score and finished in a tie for 15th place with Young.     He finished the fall as Clemson’s top golfer as he was four-under-par for his 12 rounds.

Cody Proveaux had four more birdies on Sunday, but shot a 79.  He had 14 birdies for the 54 holes, second best in the entire field.  He finished with a 230 score.

Peter Mathison played the event as an individual and finished 50th with a 225 score.  That included a fine even par 72 on Saturday when he played the front nine four under par.

The Golf Club of Georgia