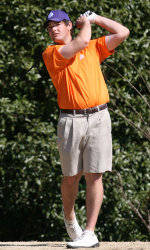 CLEMSON, SC – McCuen Elmore shot a two-under par 70, including birdies on the 17th and 18th holes to lead Clemson to a 296 team score and a tie for third place at the 12-team Carpet Classic at The Farm in Dalton, GA on Sunday.

Alabama finished first in the event that had seven top 25 teams in the field with an 856 score. Wake Forest was second at four-under-par 860, followed by Clemson and Georgia Tech at 862. Auburn was fifth at 867 and fourth-ranked Georgia finished tied for sixth with Texas Tech at 876. Clemson was ranked 17th in the nation entering the tournament and figures to improve its national ranking with the performance.

Alabama defeated Clemson by six shots in winning the tournament. The difference was the 14th and 16th holes on Sunday. Alabama shot nine shots better than Clemson on those two holes combined in the last round.

It was a big improvement for the Tigers in this tournament relative to last year when Clemson finished 9th out of 12 teams, and it was Clemson’s best finish at the Carpet Classic since the fall of 2006 when Clemson was second.

Elmore had rounds of 70-75-70 in finishing with a 215 score for the three-day event. His birdies on the last two holes allowed Clemson to tie ACC rival Georgia Tech. Elmore, playing in just his fourth event as a Tiger, finished 11th in the field of 60 golfers.

Clemson’s top golfer for the 54 holes was Ben Martin had a 64 at the 2006 Carpet Classic. Burger had a 75 on Sunday, but played the last nine holes at even par.

David Dannelly, playing in his first career event for Clemson after transferring from Coastal Carolina, had a 217 score for the three days, including a five under par 67 in the first round when he had nine birdies. He had a 77 on Sunday.

Crawford Reeves was Clemson’s second best golfer on Sunday with a 74 and finished at 220 for the tournament, 23rd in the field. Reeves day on Sunday included an eagle on the par five 12th hole for the second straight round.

Alex Boyd had an 83 on Sunday and his score did not count towards Clemson’s team score.