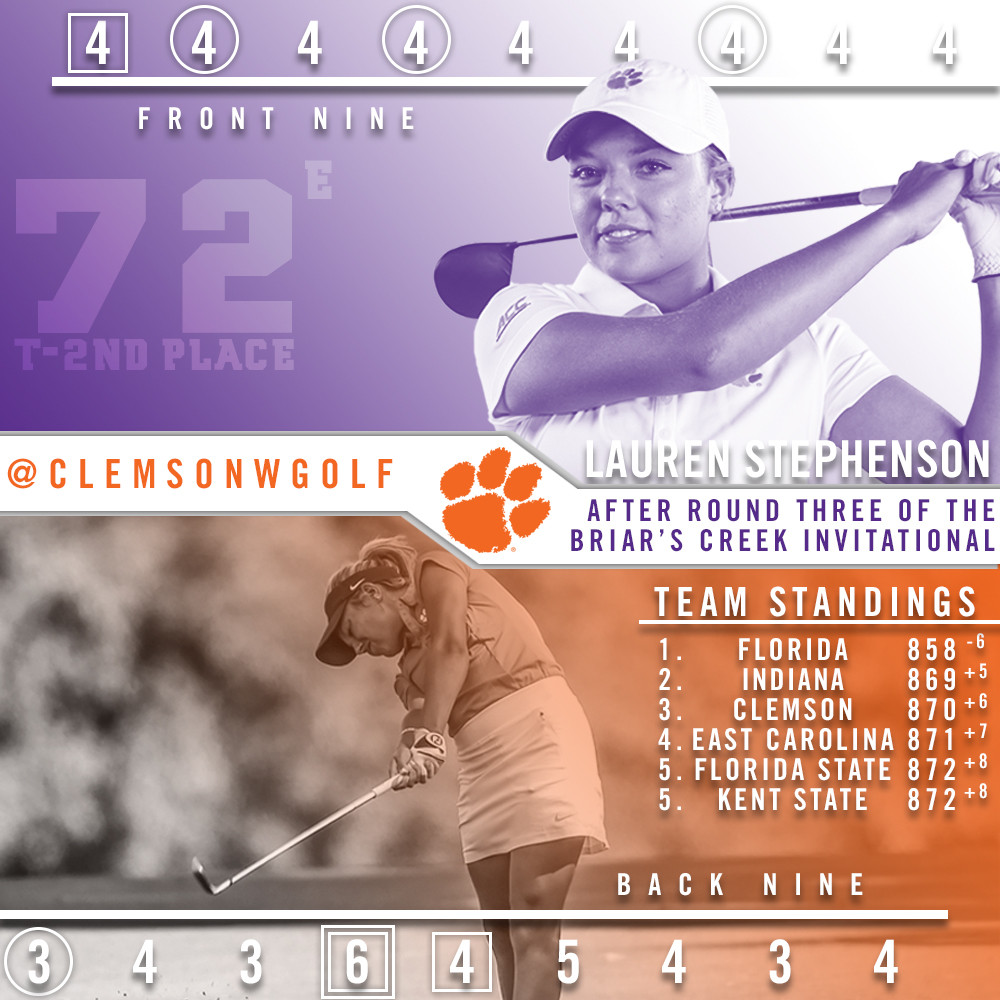 Clemson, S.C.—Lauren Stephenson finished second for the tournament with a seven-under-par score of 209 and Marisa Messana shot a final round 69 to lead Clemson to a third-place finish out of 18 teams at the Briar’s Creek Invitational at Johns Island, S.C. on Tuesday.

Clemson finished with a six-over-par score of 870 for the three rounds, 12 shots behind eighth-ranked Florida and just one shot behind second-place Indiana.  J.T. Horton’s Tigers finished ahead of six top 40 teams, and ranked as the top ACC squad in the field.

Clemson had team scores of 294-288-288 for the three rounds over two days.  It marked the first time since the first tournament in program history (Cougar Classic, 2013) that Clemson had two rounds at even par or better in the same tournament.

Clemson’s third-place finish was the second best of the year and it was the squad’s fourth top five finish in seven events.   The next time Clemson plays it will be as the host school in the Clemson Invitational at the Reserve at Lake Keowee April 1-3.

Stephenson had rounds of 69-68-72 in scoring a seven-under-par 209.  The 209 score tied for the second best 54-hole score in Clemson history and was just two shots short of Ashlan Ramsey’s record of 207 set at the Ruth’s Chris Invitational in Chapel Hill in the fall of 2013.

The native of Lexington, S.C. played the par five holes in seven-under-par for the 54 holes, tied for the best in the field, and had 13 birdies, tied for third in the field.  It was her second top two finish of the year as she was a co-medalist at Yale in the fall.

F. Gustafsson Spang of East Carolina won the tournament by one shot over Stephenson and Morgane Metraux of Florida State.

Alice Hewson was Clemson’s second best player for the tournament with a 218 score, two-over-par, after rounds of 71-74-73.  Clemson’ s top player on Tuesday was sophomore Marisa Messana, who had a 69, her top round of the year and tied for the best round of her career.   She nearly played a flawless round as she had four birdies and did not make a bogey until her final hole.

Junior College transfer Sydney Legacy finished the tournament strong with consecutive rounds of 74.   Her play down the stretch was important as she made three straight birdies at one point (holes 18, 1, 2) and played her last six holes in two-under-par.

Junior Sloan Shanahan had a 78 on Tuesday.  She had a counting score of 76 in the first round, then had to withdraw during the second round due to a bad back.  She came back to finish the tournament on Tuesday.

“I’m really proud of the team today and how we played the entire week,” said Horton.   “We were very consistent with 10 rounds of 74 or better This is a great positive for us heading into hosting the Clemson Invitational in just 10 days.

“I am really excited for Lauren.  She played fantastic golf this week and almost came away with a victory.”