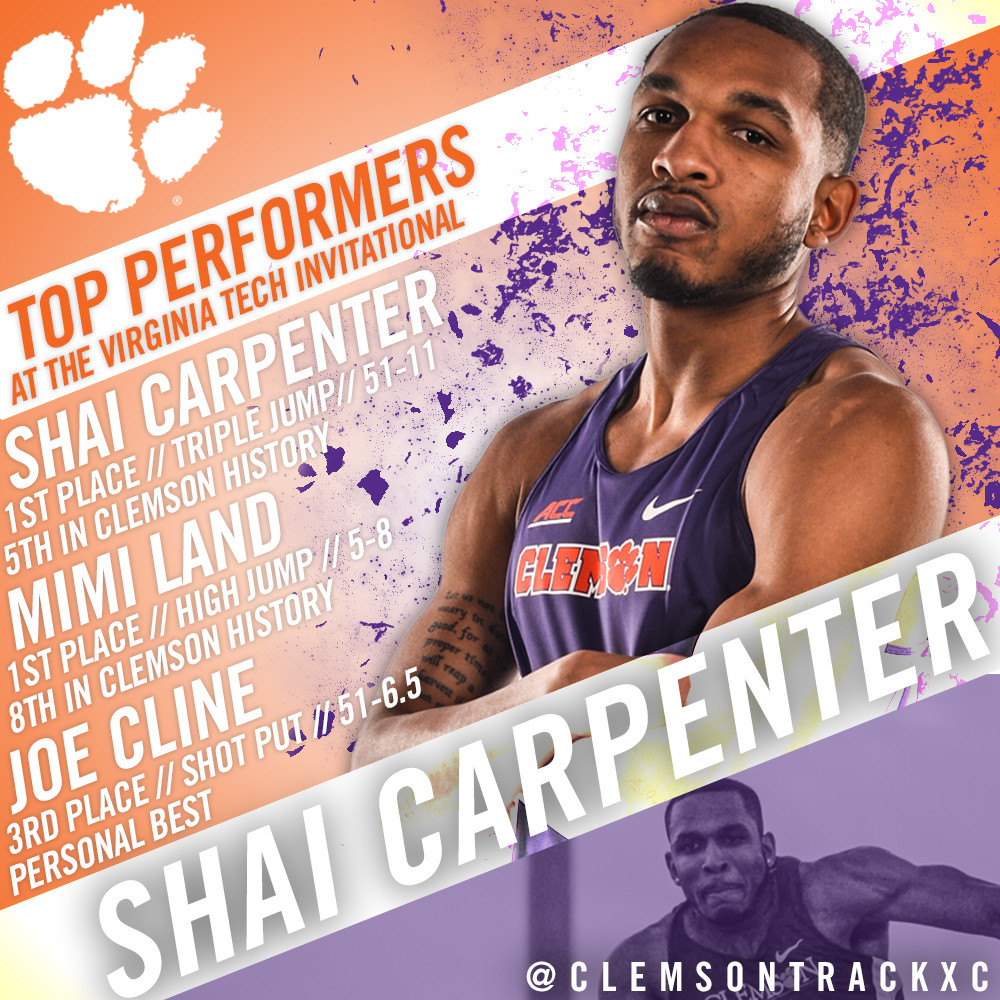 Carpenter made his 2016 debut in the triple jump and won the event with a leap distancing 51-11. The mark is good enough for fifth all-time in Clemson history but it is not a personal best as the redshirt senior currently holds the third best mark all-time.

Similar to Carpenter, Land also finished first in her 2016 debut however she won the high jump with a height of 5-8. The height would place her eighth all-time in program history, however, she already holds the second highest mark with a personal best of 6-0.5.

Iana Amsterdam and Anasterasia Terrell both competed in the triple jump for the first time this season and finished with the third and fourth best marks of the meet. Amsterdam recorded a jump measuring 40-9.5 and Terrell was just two inches behind her with a distance of 40-7.5.

Quanterious Caldwell placed third in his second collegiate competition with a height of 6-6.75 in the high jump. Rounding out the field events, Joe Cline threw a personal best 51-6.5 in the shot put to also place third.

On the track, Deja Parrish and Grace Barnett each walked away with first place efforts. Parrish ran a 55.56 in the 400 meter dash while Barnett blew away the competition in the 800 meter run with a 2:09.20. Behind her Dana Maydew ran a personal best 2:16.96 and Madison Huffman capped off the event with a time of 2:19.54 placing her in seventh place.

After her second place finish last night in the 60 meter dash, Sabria Hadley was the runner-up in the 200 meter dash today, clocking in at 23.76. Taylor Williams trailed her in fifth place at 24.59.

To finish the meet, Clemson placed both of its women’s 4×400 teams in the top three. Parrish anchored Olivia James, Tanisha Coppin and Ersula Farrow in their second place effort as they completed the event in 3:43.04. Hadley and Williams built the lead of Clemson’s third place team, as they assisted Torie Robinson and Imani McGowan to a time of 3:51.96.

The Tigers are back in action next weekend and will face an even tougher test. Clemson will travel to Lexington, Kentucky for the Kentucky Invitational on January 22 and 23.