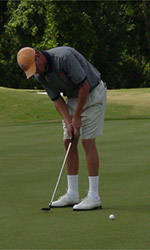 Statesboro,GA – No Clemson player shot better than a 74 and the Tigers shot a 297 team score on Sunday, as Clemson finished sixth out of the 15 teams in the E-Z-Go Chris Schenkel Invitational in Statesboro, GA. It was just the second time all year that the second-ranked Tigers failed to finish in the top four of a tournament.

Pin placements were difficult and it was reflected in the scores as no team bettered par on the day. NC State had the top team score on Sunday with a 288 The Pack was paced by Justin Walters who had a 67, the top round of the day. He won the individual championship with a 207 score, five shots ahead of the field. Augusta State won the event with an 865 total, one-over-par. Even the team champion Augusta State shot eight-over par 296 on Sunday. Wake Forest, ranked third in the nation behind Clemson and Georgia Tech in the Sagarin Poll, finished second at 867, while the Pack was third at 871. Florida was fourth at 872, followed by defending NCAA Champion Florida at 874. Clemson and Duke were tied for sixth at 876.

Clemson’s top player for the tournament was junior D.J. Trahan. He finished in a tie for fifth, but his round of 77 on Sunday did not count towards the Clemson team score. Trahan had rounds of 69-69-77 in finishing tied for fifth with Florida players Camilo Villegas and Ari Savolainen.

The turning point in Trahan’s round came on the ninth hole when he drove the ball straight down the middle of the fairway 315 yardsSinto a lake. He double bogeyed the par five hole. Still, it was another top 10 finish for Trahan, who was trying to become the first Clemson golfer in history to win three tournaments in the same year. He was the leader after two rounds at six-under-par. He finished with a 215 total, one-under-par.

Ben Duncan finished in a tie for 20th with a 219 score after rounds of 70-75-74. He was one-under-par with four holes left on Sunday, but bogeyed three of the last four. It was Duncan’s third straight top 20 finish.

Matt Hendrix and Gregg Jones both shot rounds of 74 on Sunday and tied for 34th with a 222 total. Hendrix had 16 pars and two bogeys. The Clemson sophomore hit 15 greens in regulation, but just couldn’t drop a birdie putt. He had three straight rounds of 74. Jones was coming off consecutive top five tournament finishes heading into this weekend and was ranked 15th in the nation.

Freshman Jack Ferguson shot a 227 for the tournament after rounds of 76-76-75. The native of Seneca finished tied for 58th.