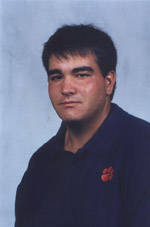 Top ranked Clemson finished second at the Ping/Golfweek Preview at Karsten Creek in Stillwater, OK on Tuesday afternoon. The Tigers shot a final round 294 to finish at 22 over par 886, six shots behind champion Augusta State.

The event was held at Oklahoma State’s home course, a par 72 layout that is 7290 yards long. It will be the site of the NCAA Championships May 27-30, 2003. Clemson was the defending champion.

Arizona finished third in the 15-team field with a 29-over par team score. Auburn was fourth (+30), Texas and Wake Forest were tied for fifth at 33 over.

Clemson’s top golfer for the tournament was sophomore Jack Ferguson, the second time in three events that he has led the way. Ferguson shot his second straight even par round of 72 to finish at 220 for the three days, four-over par. He was tied for eighth in the individual race, his second top 10 of the fall.

D.J. Trahan also shot a 72 on Tuesday. Trahan played the final 36 holes in three under par after shooting an 83 in the first round on Monday, the second highest round of his 113-round Clemson career. Trahan had a 224 total for the event, good enough for 19th place.

Matt Hendrix and Ben Duncan both shot rounds of 75 on Tuesday. Hendrix finished the tournament at 222, good enough for 13th place, his second top 15 finish of the fall. Duncan had a 229 and finished 38th.

Junior Gregg Jones had a 77 on Tuesday and his score did not count towards Clemson’s team total. His 228 score for the 54 holes was 32nd.

Clemson will be back in action next week at the Jerry Pate Intercollegiate. The Tigers will play 36 holes on Monday and 18 on Tuesday in the event in Birmingham, AL. Clemson has won the tournament four of the last five years.