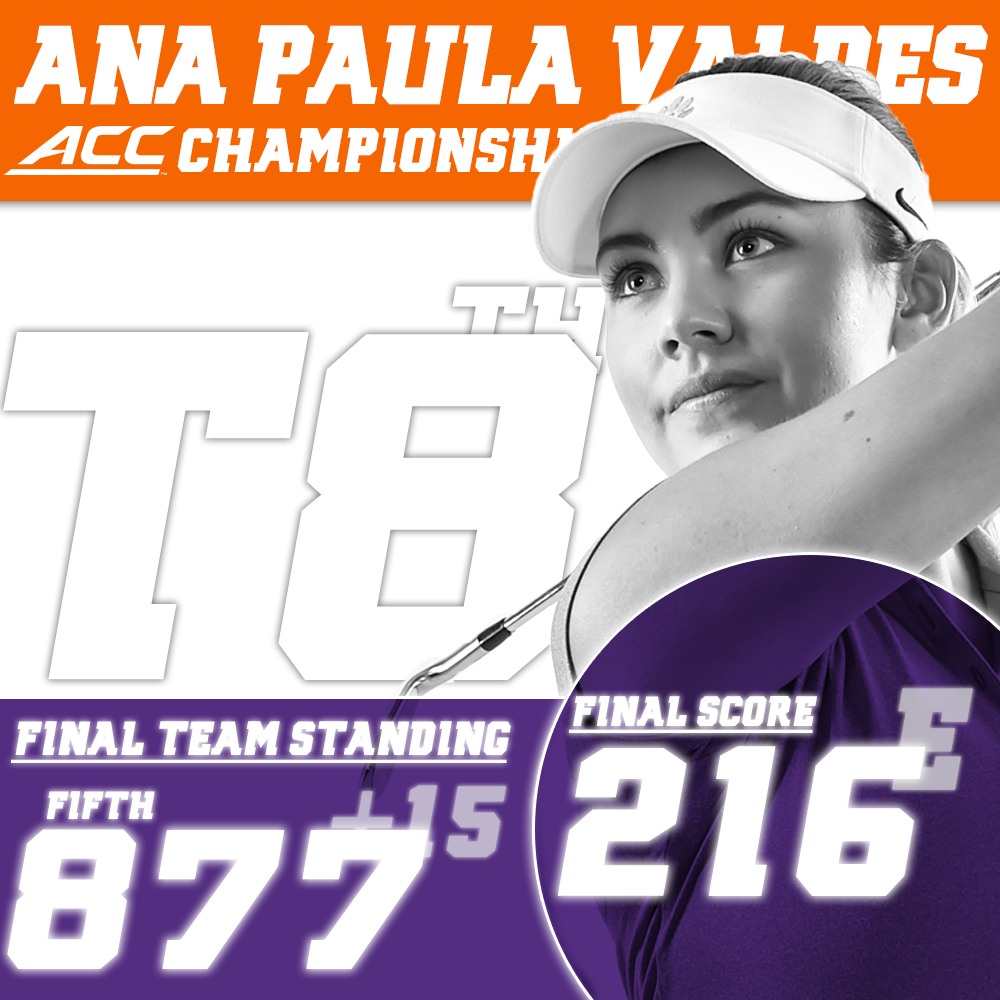 Clemson began its women’s golf program in the fall of 2013 and has improved each year at the conference level with consecutive finishes of ninth, eighth, sixth and now fifth.

Duke won the tournament by nine shots with a five under par score of 859.   Fourth ranked Florida State, who had six wins this year entering the tournament, finished second with an 868 score. Miami (FL) finished third at 874 after scoring the best team score of the day with a 288.   North Carolina was fourth at 876, one shot better than Clemson’s 877.   NC State, ranked 25th in the nation, was sixth at 888.

Valdes shot a 54-hole score of even par 216. The freshman from Mexico finished tied for eighth, the highest individual finish by a Clemson women’s golfer at the ACC Tournament. Valdes also became the first Clemson golfer to shoot even par or better in three consecutive ACC Tournament rounds.

On Saturday, Valdes had four birdies and four bogeys. She finished in grand style with a birdie on the par five 18th hole, the only Clemson golfer to make a birdie on the final hole this weekend.    Valdes finished the tournament with 12 birdies, best among Clemson golfers and second best in the field of 60 golfers.

Alice Hewson finished 11th with a 217 score over the 54 holes. The sophomore got off to a good start on Saturday as she made three birdies in her first four holes. She was tied for the lead at that point at four-under-par. But Hewson had some drives that did not find the fairway and finished with a three-over-par 75. Still her 11th place finish gave Clemson two of the top 11 players in the field for the first time at the ACC Tournament.

Freshman Kennedy Swann joined Valdes with a one-under-par 35 on the back nine and finished with a 75 on Saturday. The native of Austin, Texas played the last six holes at two under-par. Her 229 total was 43rd in the field.

Sydney Legacy had a 76 on Saturday and finished with a 221 total for the three days. Her five over par score was 25th best in the field.   She started the tournament with a one under par 71.

The Reserve at Pawleys Island