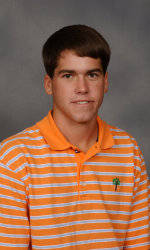 Evans, GA – The Clemson golf team shot a three-under par 285 on Sunday’s final round at the Administaff Augusta State Invitational, propelling the Tigers to a 10th-place finish among the 18-team field. Clemson’s 285 team score was its best 18-hole performance out of the three rounds held at the Champions Retreat Golf Club. The Tigers finished +10 as a team for the 54 holes.

Clemson was led Sunday by red-shirt freshman Ben Martin, who fired a final round 68. It was the top round of the weekend by any of the Tiger golfers. The Greenwood, SC native began modestly with a 35 on the back nine (opening nine for Clemson). However, he carded three birdies and no bogeys down the stretch to earn the 68. He finished tied for 12th in the individual standings after a three-round total of 215 (one-under par).

Kyle Stanley, Clemson’s top performer through the first two rounds, shot two-over Sunday and finished tied for 12th with Martin and others. He shot 71-70-74 over the 54 holes. Stanley was actually three-over par on the opening nine holes Sunday, hampered by a double bogey on the par three 17th hole. He recovered with a pair of birdies on the back nine. Stanley has not finished worse than 12th individually in his last four tournaments, dating to the fall season. His two-over score Sunday did not count towards Clemson’s team total.

David May and Phillip Mollica both finished seven-over par for the tournament. May shot an ever par 72 on Sunday in the final round. The New York native was two-over par on the opening nine holes, but birdied the fourth and ninth holes to level his score out by day’s end.

Mollica was steady again for the Tigers on Sunday, shooting a one-over par 73. He bogeyed the opening hole (10th), but then proceeded to shoot one-under par with no bogeys over the next 13 holes. He bogeyed the par four sixth hole, but finished with three straight pars.

Sam Saunders struggled through the first two rounds, but counted towards Clemson’s score on Sunday with an even par 72. He birdied the final two holes of the day, the eighth and ninth, to reach the even par ledger. Saunders finished the tournament 14-over par, but made an eight-stroke improvement between the second and final round.

The Tigers next return to action April 9-11 at the Atlanta Classic. The Tigers are the defending champions of the event, held at the Golf Club of Georgia.