Clemson Fifth after First Round of NCAA Austin Regional

Clemson, S.C.—Kyle Cottam fired a one-under par 70, while Colby Patton and Jacob Bridgeman had even-par rounds of 71 to lead Clemson to an even-par 284 team score and a fifth-place standing  after the first of three rounds of the NCAA Austin (Texas) Regional. The top five teams in the 14-team field competing in the 54-hole regional will advance to the NCAA National Championship Tournament in Fayetteville, Arkansas May 24-27.

Clemson is just six shots behind first0place Pepperdine and host school Texas, who had team scores of 278. The Tigers are six shots ahead of the fifth-place cutline. TCU is third at 280, while Arkansas is fourth at 282.  Southern California,  ranked seventh in the nation entering the regional, is tied for sixth with Marquette at 290. San Jose State is eighth at 291.

Clemson had a balanced performance on the University of Texas Golf Course, as all five of Larry Penley’s players shot between 70 and 74. In addition to Cottam’s 70 and the 71 scores turned in by Bridgeman and Patton, senior Bryson Nimmer had a 72 and junior William Nottingham shot a 74. The top four scores count toward the team score.

Nimmer has the top stroke average on the team with a record pace of 68.97. It marked just the seventh time in 31 team rounds this year that three players other than Nimmer shot par-or-better in the same round. “It was a solid day,” said Head Coach Larry Penley, who is coaching in his 36th NCAA Tournament, more than any other active Division I coach and more than any other coach in any sport in Clemson history.

“This is a tough course, especially holes 5-8. But we hung in there on those holes and played the par fives well all day.” Clemson played holes 5-8 in three-over-par, but shot six-under-par on the par five holes, second best in the field. Par five scoring has been a problem for the Tigers this year.

Cottam’s round of one-under-par 70 was his fifth under-par round of the year and his second best opening round of the year. The sophomore had three birdies and just two bogeys as he had nine-hole scores of 36-34 and stands in a tie for ninth place after the first round. It was the first time all year Cottam had the low round of the day among Clemson golfers.

“Kyle really drove the ball well today,” said Penley. “I believe he drove it in the fairway on all but just two holes, and the two times he missed the fairway he was very close. “

Bridgeman and Patton are tied for 13th in the 75-player field with even-par rounds. Bridgeman, a freshman in his first career NCAA Tournament, had four birdies and four bogeys.  He and Patton both played the par five holes at three-under par, two of just three players to do that on Monday. Patton was the only Tiger to play the front nine (35) lower than the back nine (36).

Nimmer had a one-over-par 72 as he had three birdies and four bogeys after shooting a 36 on both nines. It was just his seventh round over par this year, but he is still in the top 25 with a 22nd place standing after 18 holes. Nottingham’s 74 is in a tie for 35th, as he had nine-hole scores of 38-36.

“We are in a good position after the first round,” said Penley. “I know Southern California is going to make a run. At the end of the day I think we are going to have to beat either TCU or Arkansas to advance.”

Clemson will begin play on Tuesday at the 10th tee at 9 a.m. (eastern) and will play with Arkansas and Southern California. Live scoring is available on golfstat.com. 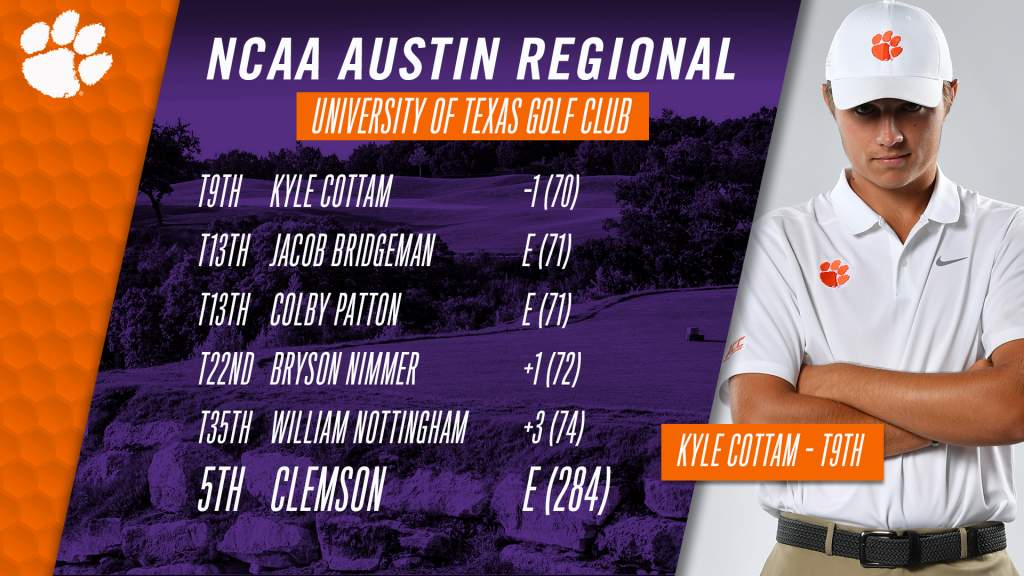