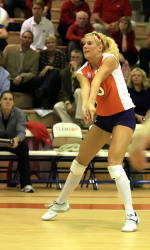 Clemson Falls To Utah In NCAA Second Round

Clemson, S.C. – Utah defeated Clemson in three sets on Saturday NCAA Volleyball second-round action at Jervey Gym. The Utes improved to 26-4 on the season, while the Tigers’ season ended with a 23-10 ledger.

“I’m very proud of this team for making it this far,” said Utah Head Coach Beth Launiere. “They are a special group of players. We lost a conference match on the road a couple of months ago and since then we have won a bunch of volleyball matches. What this team has done all year is respond. We went out tonight with great energy and great determination.”

Utah claimed the first set with a 25-21 victory. Utah’s Lori Baird blocked the ball to put them on the scoreboard first. Clemson’s Lia Proctor responded with a kill on the next play. The Utes went on a 5-0 run early to lead 9-3. Both Emillie Toone and Kathryn Haynie contributed kills during the run. The Utes would continue to dominate as they scored five more points while the Tigers scored two. The Utes led 14-5. Clemson kept clawing their way back into the game and subsequently went on a 3-0 run that included a kill from Lisa Jedlicka and a serving ace from Didem Ege. Clemson was within six (14-8). Clemson then went on another 4-0 run to be within three points (16-13). The Tigers got behind early in the set. However, Clemson’s clawing brought them close in the end. Down 24-18, Clemson went on a 3-0 run to bring the score to 24-21. But an attack error for Clemson ended the set. Utah’s Haynie had five kills with Toone and Karolina Bartkowiak adding three.

The Utes won a close won 26-24 in the second set. Baird played an all-around game early on with a kill and block in consecutive plays. Then, Utah’s Chelsey Sandberg killed the ball to put the Utes up 3-2. Tied at five, Utah went on a 4-0 run with two kills coming from Toone and a serving ace from Haynie. Utah led 9-5. Clemson took the lead 12-11 after a 6-0 run. The Tigers’ Jeannette Abbott had a kill, while Danielle Hepburn had a block in that run. Down 15-13, Utah began another 4-0 run that consisted of two serving aces from Baird. Clemson retaliated with a 5-0 run of their own to lead 20-17 late in the set. However, a crucial 4-0 run by the Utes put them on top 24-23. Proctor killed the ball to tie the score, but Utah scored the final two points of the set. Toone had five kills and Baird contributed four.

Baird and Toone led the Utes to their third straight set victory. Baird’s aggressiveness showed as she had the first two kills of the set to put them up 2-0. Baird then kicked off a 3-0 run with another kill. The Utes led 6-3. Toone began to shine in the middle of the set as she had two kills and a block. The game remained close however as Abbott had two kills and Hepburn had two blocks. With Utah leading 12-11, they went on a 6-0 run while Baird served the ball. Baird had two serving aces in that run and Toone had a kill. Utah led 18-11. Down the stretch, for every one point Utah had, Clemson matched it with two points. Yet, the Utes were dominant in the end of the set and won 25-21. Baird had five kills and Toone had four.

“Baird and Toone have not been stopped all season,” said Coach Launiere. “And I didn’t think they would be stopped tonight either. When we are able to get the ball into the middle with Baird and Toone we can be a great team. And we were able to do that tonight.” Utah advances to the Seattle regional hosted by the University of Washington.

“I am really proud of the team,” said Abbott. “They played great and we are just disappointed because we really wanted to go to the sweet 16, but I am glad that if we had to lose it was to a team like Utah.”