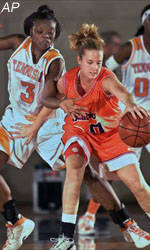 Maui, HI–Tennessee outscored Clemson 48-24 in the second half, and went on to an 86-58 win over Clemson in the first round of the Maui Classic in Lahaina, Maui, Hawaii. Tennessee, ranked second in the nation in both polls, improved to 2-0, while Clemson fell to 1-2. Clemson will meet Alcorn State on Saturday in the consolation round, while Tennessee will meet 21st ranked Illinois in the championship.

Clemson’s two losses have been to two top 25 teams. Earlier this season, Clemson lost at Illinois.

Clemson was led in scoring by Chrissy Floyd, who scored 16 points. The sophomore also had five rebounds in her 29 minutes of play. Senior center Erin Batth was the only other Lady Tiger in double figures with 12. She also had a game high seven rebounds before fouling out with in 25 minutes of play.

All-American Tamika Catchings scored 20 points to lead Tennessee, while Kara Lawson and Kristen Clement scored 11 apiece. Tennessee won the battle of the boards 53-35 as all 11 players who participated for Tennessee had at least two rebounds in the balanced