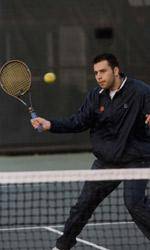 CHAPEL HILL, N.C. — The 44th-ranked University of North Carolina men’s tennis team won the doubles point and four out of six singles matches to defeat Clemson 5-2 on Friday night in Chapel Hill. With the loss, the Tigers fall to 8-12 overall on the season and 1-2 in the ACC.

Even though the Tar Heels won the doubles point, Clemson’s duo of Damiisa Robinson and Goran Sterijovski were impressive in the No. 2 position as they downed North Carolina’s Geoff Boyd and Nicholas Monroe by a score of 8-4. With the win, the pair improved their dual doubles record to 11-2 on the season.

In singles action, the Tar Heels won four out of the six matches to clinch the victory. Sterijovski, however, was again impressive as he won his match in the No. 2 position over Trystan Meniane in three sets 6-3, 3-6, 6-3. Picking up the other singles victory for the Tigers was Sander Koning who won in the No. 6 slot over Andy Metzler by a score of 6-3, 7-5. With that victory, Koning pushed his dual singles record to 13-4 on the season.

The Tigers will next be in action this Sunday afternoon when they play host to Virginia at 2:00PM at the Hoke Sloan Tennis Center.