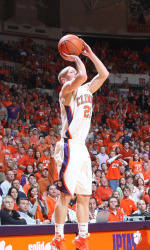 CHAPEL HILL, N.C. — Clemson (16-2, 2-2) never got closer than 13 the rest of the way and trailed by as many as 27 points. It was the Tigers’ second consecutive defeat after a 16-0 start, following Saturday’s home loss to Wake Forest that propelled the Demon Deacons to the No. 1 ranking this week.

With Ellington rediscovering his shot, North Carolina’s offense looked about as sharp as it has in weeks despite Hansbrough being relatively quiet against Clemson’s physical frontline until the game was in hand. North Carolina shot 53 percent for the game, while Deon Thompson — after failing to reach double figures in the first four conference games — had 15 points.

Terrence Oglesby scored 17 of his 22 points in the first half for Clemson, and his third 3-pointer of the half gave the Tigers a 38-36 lead with 3:31 left. But North Carolina’s offense got going behind Ellington, who hit a 3 off a feed from Lawson in the final seconds to cap a 9-2 spurt that gave the Tar Heels a 45-40 halftime lead.

The Tar Heels dominated from there, starting the second half with a 15-2 run that ended with consecutive scores from Hansbrough to make it 60-42 with 14:31 left.

The Tigers, meanwhile, got nothing going in the second half, missing 16 of their first 20 shots before finishing the half at 10-for-35 (29 percent).

Hansbrough had to leave the game briefly in the first half after being hit in the mouth during a scramble under the basket. The school said he had a loosened front tooth and he had to play the rest of the way with a mouthpiece.