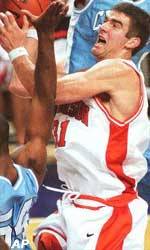 Clemson Falls To No. 7 UVa On The Road

The Tigers were largely without scoring leader Will Solomon, who only arrived in Charlottesville earlier Wednesday because of the flu and played only in short bursts, finishing with seven points in 18 minutes.

Hand, a four-year starter who bridges the end of the Jeff Jones era, when Virginia basketball was down, to the return of the Cavaliers to prominence under coach Pete Gillen, received a rousing welcome as the last of five seniors honored before their final game at University Hall.

He quickly got started, scoring on a three-point play after 75 seconds, and seemed to be a step faster than Clemson in the opening half.

The Cavaliers led 42-33 by halftime after turning 17 turnovers into 19 points. Hand, whose fullcourt press harassment forced several of the giveaways and easy Virginia layins, and Stephane Dondon had 11 points each.

The Tigers, who finished with 25 turnovers, were led by Tomas Nagys with 19 points and Dwon Clifton with 10.

With 34 seconds left, the fourth and fifth seniors, walk-ons Josh Hare and Greg Lyons, drew the loudest cheer of the night when they entered the game with Virginia ahead 81-65. Hare then added to the fury, hitting a 3-pointer with 7 seconds remaining for the final score.