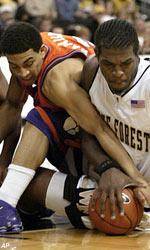 Wake Forest went on an 18-9 run over the last 5:46 of the game and defeated Clemson 78-63 on January 10 at Winston-Salem. It was Wake Forest’s 11th straight win of the season regardless of site and the Demon Deacons 24th straight home victory over two years. It was the 14th straight year that Wake Forest had beaten Clemson in Winston-Salem.

Clemson was led by Vernon Hamilton and Chey Christie. Hamilton led Clemson in scoring, rebounding and assists, the second time in the last three games he had recorded a “Triple Leadership”. Hamilton had 17 points, his second highest total of the year, six rebounds, all defensive, and five assists. Christie added 16 points on 5-10 shooting, including 2-3 on three-point shots.

Clemson shot just 2-6 from the field inside the last five minutes of the game, while Wake Forest was hitting 7-10 from the field in that same time frame. Wake Forest’s largest lead was the final score. The Demon Deacons scored 34 of their 46 second-half points in the paint.