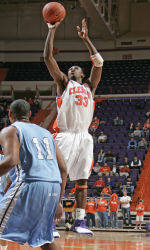 Since losing their No. 1 ranking at Illinois on Dec. 1, the Demon Deacons (13-1, 2-0 Atlantic Coast Conference) have averaged nearly 90 points. And Gray, their leading scorer, is a big reason why.

Against the Tigers, Gray made his first five 3-pointers to give Wake Forest a double-digit lead then helped maintain it with a 6-of-6 performance from the foul line as he matched his career best for points set against Florida State last season.

Eric Williams added 21 points, the second time this season that Wake has had two players with more than 20 points.

Akin Akingbala led Clemson (9-5, 0-2) with 16 points, which tied his career high set against Hampton in the season-opener.

Gray nearly matched his career high with 25 points in the first half. After Clemson ran out to a 5-0 lead, Gray began to silent the large Littlejohn crowd with his long-range shooting.

His first two 3-pointers put the Demon Deacons ahead to stay. Gray’s swished a fourth 3-pointer with Sam Perry draped on him. Then Gray finished his starting run with a wide-open 3-pointer 15 seconds later that led Clemson coach Oliver Purnell to call time out – presumably to ask, “Who’s got Gray.”

Gray’s performance was part of a 22-4 run in the game’s first 6 minutes that gave the Demon Deacons control.

Gray reached 31 points on a simple 8-foot jumper with 5:33 remaining that put Wake Forest ahead 87-59. He came out of the game about 30 seconds later as the Demon Deacons went with four walk-ons and sophomore center Kyle Visser to end their fifth straight victory over the Tigers.

Gray finished 10-of-19 from the field. Wake Forest hit the century mark for the first time since its dramatic 119-114 triple overtime victory at North Carolina on Dec. 20, 2003.

Sharrod Ford, Clemson’s leading scorer coming in at almost 16 points a game, was 0 of 5 from the floor and held to six foul shots.

About the only drama after the opening minutes came in right before halftime when Clemson’s 6-foot-9 freshman, James Mays, lost his right shoe near his basket and played without it for nearly 90 seconds while the fans roared.

After a security guard brought the shoe around to the Clemson bench, Purnell lobbed it to his young forward to loud cheers.