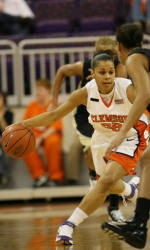 Clemson Falls To No. 3 UNC

Jessica Breland and Erlana Larkins added 13 and 12 points respectively for the Tar Heels, who controlled the game from the beginning.

Sthefany Thomas led Clemson with 14 points and Lele Hardy had 11 points and 14 rebounds. The Tigers missed their first 14 shots of the game before Thomas made a layup with 14:10 left in the first half.

North Carolina, continued the hot shooting it showed in a 93-76 victory at No. 11 Duke on Monday. The Tar Heels shot 56.2 percent in the opening half behind DeGraffenreid’s 17 points, three assists and two steals.

Lanky forward Even Breland made her first 3-pointer of the season. It was the second straight game where one of the Tar Heels’ formidable frontcourt players hit her first basket of the season from behind the arc.

Carolina led 46-18 at the half and opened up the second half in the same dominant fashion. DeGraffenreid dished a behind-the-back pass to Rashanda McCants for the first bucket of the half as the Tar Heels launched a 7-0 run.

The Tigers committed back-to-back turnovers coming out of the first media timeout of the second half, both leading to easy Tar Heel baskets and allowed North Carolina to take a 61-22 lead with 15:37 left.