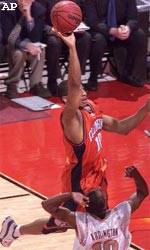 CLEMSON, S.C. – Nate James has won a lot of games and titles in four years with Duke. And he has watched a lot of honors and praise go to everyone else but him.

“I’ve been here for five years, but people still don’t know who Nate James is,” said James, who scored a career-high 27 points to lead the third-ranked Blue Devils to an 81-64 victory Wednesday night. “So, I want to go out there and show. Show them that this is my last go-round and I want to win.”

They would have done none of it without James, a soft-spoken senior who has watched Trajan Langdon, Elton Brand, William Avery, Shane Battier and Williams soar as Blue Devil stars, while he did what he could to help.

“That’s all up on me,” said James, who surpassed his career high of 26 set in November against Texas. “If I go out there and play my game and lock guys up and control the ball, everything else will come. This year, I’m getting a chance to show that and I want to take advantage.”

James scored Duke’s first eight points, then steadily stung Clemson with his shooting. He also had primary duty defending Clemson’s Will Solomon, the ACC’s top scorer held to 11 points on 4-of-16 shooting.

James’ line was as pure as any put up by Brand or Battier – 10-of-14 overall, 3-of-5 on threes, seven rebounds and assist and a steal.

“I think Nate has always understood that he’s a key guy on our team,” Duke coach Mike Krzyzewski said. “He’s certainly not the most talented guy on our team, and as a result you can only talk about so many guys.”

But James brings stability when Williams manages just eight points, 13 fewer than his average, and commits 10 of his team’s 16 turnovers.

“He’s the most stable player we have,” Krzyzewski said. “You saw his best game out there tonight.”

Mike Dunleavy finished with 17 points and 17 rebounds, and Shane Battier had 15 points for Duke.

But with Williams struggling through a second straight off-game – he had just eight points in a 100-58 victory over Florida State on Sunday – the Tigers were in it for a lot longer than expected.

But Chris Duhan and Williams followed with 3-pointers and Duke took control for good.

“When you have six for-sure NBA players, you go tooth and nail for what we did for a long period of time, when you play at that level, you’ve got some sunny days ahead,” said Clemson coach Larry Shyatt, whose team lost seven straight for the first time since the 1983-84 season.

The first half wasn’t typical for Duke, except for the opening six minutes when it broke to a 14-2 lead.

James and Battier each hit two 3-pointers while the Blue Devils defense held Clemson to 1-of-10 shooting and four turnovers.

But just when it looked like a second straight blowout, Scott had a basket and a three-point play to close an 17-6 run and bring the Tigers to 20-19.

Two three-point plays by Dunleavy, and five points by Battier put the Blue Devils back in front.

Duke was held to its second-lowest opening half of the season – leading 33-25. It scored 31 points against Temple in November’s Preseason NIT.