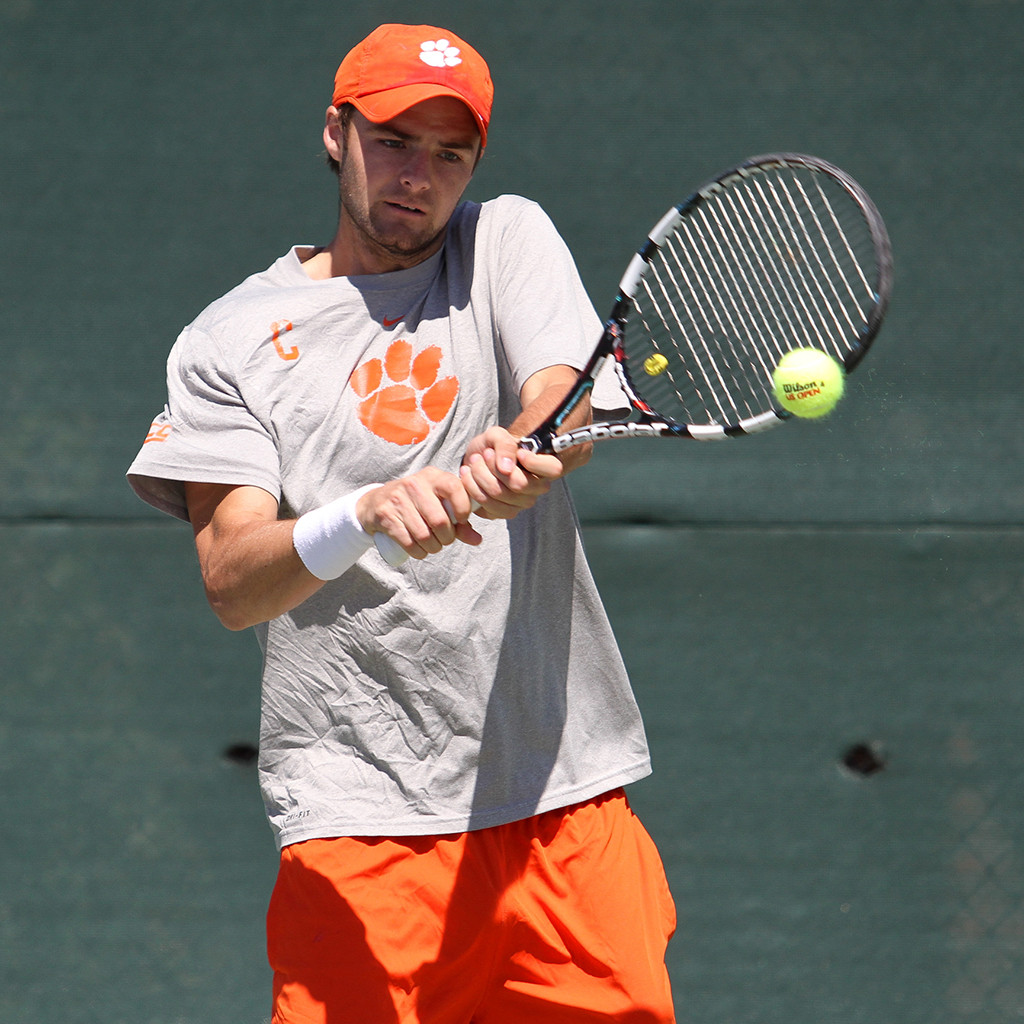 Clemson Falls to No. 23 Louisville 5-2 Sunday

WATCH: (The final eight points Hunter Harrington won in his 10-6 super tiebreak to defeat his Louisville opponent at No. 2 singles.)

CLEMSON, S.C. – The Clemson men’s tennis team dropped its third straight match, all to opponents ranked 27th or higher in the nation, on Sunday afternoon at the Hoke Sloan Tennis Center. The Tigers fell to No. 23 Louisville 5-2, and dropped to 10-11 overall and 1-6 in ACC play. The Cardinals improved to 19-4 (5-2 ACC).

Doubles play was close on all three courts, but the Cardinals ultimately prevailed, winning 8-5 at No. 2 and 8-6 at No. 3. Seniors Alejandro Augusto and Hunter Harrington, playing at No. 1 and coming off an upset over the 12th-ranked doubles team in the nation from Duke, were leading their Cardinal opponent 7-6 when play was halted.

Luke Johnson quickly tied the team score at 1-1, winning his No. 4 singles match 6-1, 6-1. The junior is on a roll, having won seven of his last eight singles matches. Johnson has also provided a spark to his teammates of late, remaining engaged and encouraging off the court as well. The Cardinals won the next four singles matches, at No. 3, No. 1, No. 5 and No. 6, in that order. Playing at No. 1 for the second straight match, Augusto played competitively against the fifth-ranked singles player in the nation, but fell 6-4, 6-3. It was the senior’s second straight match at No. 1, and also his second straight against a singles opponent ranked in the top 11 nationally. After winning their first sets, Daffra Sanon and Hampton Drake both dropped three-set decisions at No. 5 and 6, respectively.

On Court 2, Harrington prevailed in a marathon match against #123 Alex Gornet. The three-set matches on Courts 5 and 6 both finished before Harrington’s super tiebreak even began, with Harrington coming out the victor with a final score of 6-7(3-7), 7-6(8-6), 1-0 (10-6). The senior has played seven tiebreak sets in his last four matches, including the three today. Something appeared to click for Harrington after his first set tiebreak loss against Louisville, as he pulled out the next two for the win.

The Tigers continue their four-match home stand next weekend, hosting NC State and Wake Forest at the Hoke Sloan Tennis Center. Clemson faces the Wolfpack Friday at 11 a.m. and the 12th-ranked Demon Deacons Sunday at 1 p.m. The match against Wake Forest will be the sixth out of the last eight against a top-30 opponent for the Tigers.