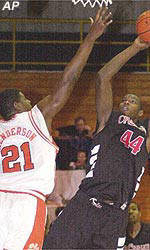 Clemson Falls To No. 22 Cincinnati

The Bearcats (7-2) advanced to Friday’s championship against the winner of the semifinal between No. 17 Alabama and Washington.

Logan turned his ankle Thursday in the opening-round win over Youngstown State and even though X-rays were negative, it seemed unlikely he would play against Clemson (7-3).

Cincinnati was dominant inside early and led 66-51 with 8 1/2 minutes to play when junior guard Will Solomon single-handedly brought Clemson back into the game.

Solomon, who finished with 32 points, scored all but two of the points in an 18-5 run that had the Tigers within 71-69 with 4:41 to play. He made two 3-pointers during the run and also turned a steal into a three-point play. His play energized the Tigers and had the Bearcats on their heels.

After the 3 that made it a two-point game, Cincinnati coach Bob Huggins called a timeout.

On the play out of the timeout, Logan nailed a 3 that started a 7-0 run that gave Cincinnati some breathing room.

Clemson was unable to get any closer than six points the rest of the way as the Bearcats went 8-for-10 from the free-throw line over the final 2:15 with Logan, who played 31 minutes, going 6-for-8.

Kenny Satterfield had 22 points and eight assists for Cincinnati, while Donald Little, the Bearcats’ leading rebounder who injured his left leg early in the opening round and also was considered questionable, had six points, five rebounds and five blocked shots in 15 minutes.

Tony Stockman and Ray Henderson each had 12 points for Clemson.

Solomon’s sixth point Thursday was the 1,000th of his career.