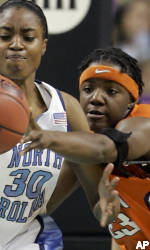 Clemson Falls To No. 2 North Carolina

Rashanda McCants had 12 points for the Tar Heels (28-2), the tournament’s top seed who has won 11 straight games and 19 of 20 overall. North Carolina, the three-time defending champion, has won 10 straight tournament games heading into Saturday’s semifinal against No. 25 Virginia.

The Tar Heels had no trouble with the ninth-seeded Tigers (12-19), who edged North Carolina State in overtime in Friday’s first round. North Carolina shot 53 percent while building a 52-35 halftime lead, a margin that grew to as many as 23 in the second half.

Larkins and Pringle, the senior frontcourt tandem, were unstoppable early. They combined for 30 points on 11-for-11 shooting in the first half against Clemson’s zone defense and opened up plenty of looks for the rest of their teammates.

Larkins finished 10-for-13 from the field to go with 10 rebounds, and McCants had six rebounds and seven assists.

D’Lesha Lloyd had 20 points and 10 rebounds to lead Clemson, which got as close as nine points on her jumper with 12 1/2 minutes left. But McCants sparked a 12-2 run that put the Tigers away, twice assisting on inside scores by Larkins before cutting through the paint for a driving basket that made it 77-58 with 8:34 to play.

Clemson got no closer than 17 points the rest of the way.

The Tar Heels got a scare when freshman reserve Rebecca Gray was injured while trying to draw a charge in the paint against Clemson’s Moreemi Davis with 6:15 to play. Gray laid on the floor for several minutes before medical personnel put her on a backboard and carried her from the court, though she appeared to be conscious and able to move.

A team spokesman said Gray apparently hit her chin on the play, then hit her head on the floor. She was taken to a nearby hospital for evaluation.

Before the game, there was a moment of silence for Eve Marie Carson, the student body president at North Carolina who was found shot to death on a Chapel Hill street Thursday. The Tar Heel coaching staff wore blue ribbons in honor of Carson, while the players placed the ribbons in their shoes. Several also had written Carson’s name on their shoes.