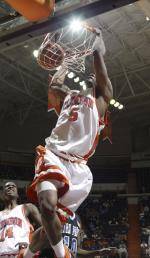 Sharrod Ford scored 20 points and pulled down a career high 16 rebounds, but it was not enough for Clemson in its “Senior Day” game against Georgia Tech on Saturday. The Yellow jackets shot 58.3 percent from the field in the second half and defeated Clemson 79-60 at Littlejohn Coliseum.

Clemson closed out the regular season home portion of its schedule with a 10-6 record at home for 2003-04, Oliver Purnell’s first season at Clemson. The Tigers did defeated four top 50 RPI teams at home this season, including North Carolina, NC State and Boston College, all teams currently ranked in the top 25.

Ford shot 6-13 from the field, 8-10 from the line and had 10 offensive rebounds among his 16 total rebounds. He also added four blocked shots in his 37 minutes of play. The 10 offensive rebounds for Ford were the most by a Clemson player since Harold Jamison had 11 against South Carolina on December 17, 1997. Ford’s total on Saturday also tied the Clemson record for offensive rebounds in an ACC game. He tied the mark of 10 by Dale Davis against Duke in 1987-88 and by Horace Grant against Wake Forest in 1986-87.

The contest was the Senior Day game for Clemson seniors Chris Hobbs and Beau Shay. Both were in the starting lineup. It was the first career start for Shay, a walk-on from Galesburg, IL. Hobbs, from Chapel Hill, NC, scored four points and added four rebounds in his 23 minutes.

Shay had one of the game’s highlights, as he made a jumper with 35 seconds left, much to the delight of the 9,200 fans in attendance. It was the first field goal of Shay’s career in Littlejohn Coliseum. He had made two on the road over his four years on the team.

Olu Babalola and Vernon Hamilton both reached double figures for the Tigers, who were playing their 10th game of the year against an AP top 20 team. Babalola had 10 points on 4-8 shooting and added three steals. Hamilton scored 10 on 3-7 shooting, including 2-2 on three-point attempts. He added two assists and had just two turnovers in 31 minutes. Hamilton now has just two turnovers over his last 71 minutes of play.

Georgia Tech was led by Marvin Lewis, who had 18 points, and B.J. Elder, who had 17. Point guard Jarrett Jack had 11 points, nine assists and eight rebounds in a fine all-around performance.

Clemson went on an 8-0 run after the power failure to cut the margin to 9-8. Clemson’s defense held Tech without a point for 7:01. A dunk by Jack off a steal by Anthony McHenry gave Tech an 11-8 lead. Clemson then hit a dry spell and Tech went on a 14-0 run to take a 25-9 lead. Clemson made just 3 of its first 20 shots from the field to start the game.

Tech moved the lead to 16 points with a 11-6 run to open the second half. But, Clemson cut the margin to 47-40 with 10:09 left on a three-point goal by Shawan Robinson, Clemson’s top three-point shooter for the season. But Tech came back with 12-3 run to move the advantage back to 16 with 7:13 left.