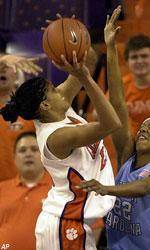 CLEMSON, S.C. – Freshman point guard Ivory Latta scored 15 points to lead four North Carolina players in double figures as the Tar Heels defeated Clemson 72-41 in women’s college basketball Thursday night in Littlejohn Coliseum. The 12th ranked Tar Heels improved to 18-3 overall, 8-2 in the ACC, while Clemson lost its third in a row and is now 15-6 overall, 5-5 in the ACC.

Clemson was led in scoring by Khaili Sanders, who both scored nine points. The sophomore frontcourt players combined to shoot 7-13 from the field, but the rest of the Clemson team made just 7-41 shots for the game.

Clemson shot just 25.9 percent from the field for the game, hitting just 14-54 shots overall. Clemson had made just 16-62 from the field in the first meeting of the year between the two teams, a 72-47 North Carolina win in Chapel Hill. Clemson has failed to score 50 points in a game just twice in the last 29 games and both have come against the Tar Heel’s defense. North Carolina leads the ACC in field goal percentage defense.

In addition to Latta’s 15 points, Kenya McBee added 11, while Leah Metcalf and Nikita Bell added 10 points apiece for North Carolina, who made 49.1 percent of its shots from the field, the second best field goal percentage against Clemson this year.

For the second straight game Clemson struggled offensively at the beginning of each half. North Carolina jumped out to a 20-6 lead nine minutes in as the Tar Heels hit 9-13 shots from the field, while Clemson made just 2-14. McBee’s shot on the inside gave North Carolina the early 14-point lead. The Tar Heels led 32-17 at intermission. It was the fewest points Clemson has scored in a first half this year.

North Carolina’s largest lead was 31 points many times, including the final score. North Carolina won the rebound battle 40-33 led by Atkinson’s 12 caroms. Clemson was led in rebounding by White who had seven in her 28 minutes of action.

North Carolina’s defense did an outstanding job on Clemson scoring leader Lakeia Stokes, who was held to six points. It was a season low for the Clemson senior who had scored in double figures in 15 straight games and was the second leading scorer in the ACC entering the contest with 18 points per game.

The Lady Tigers will travel to Florida State for a Sunday afternoon contest at 1:00 PM. Jim Davis’s team now must play four of its final six games on the road.