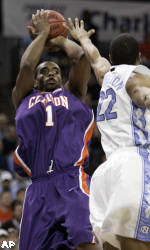 Clemson Falls To No. 1 UNC In Title Game

CHARLOTTE, N.C. (AP) – One by one, North Carolina’s players climbed onto the platform to snip a piece of the net to celebrate their Atlantic Coast Conference tournament championship. There were plenty of smiles and laughter, yet the victory party seemed somehow subdued.

After all, the top-ranked Tar Heels figure they have bigger dreams still to chase.

“We just go to the point where we realized we reached a goal,” junior Marcus Ginyard said. “But at the same time, we know there is more for us.”

That attitude hovered over their 86-81 win over Clemson in Sunday’s tournament final, a victory that almost certainly locks up a No. 1 seed in the NCAA field of 65 while giving the program a record 17th ACC title. The Tar Heels got another strong-willed performance inside from All-America Tyler Hansbrough and a stellar outing on the perimeter from Wayne Ellington to outlast the Tigers for a third time this season and close a tough tournament run in which North Carolina didn’t win a game by more than 12 points.

Now North Carolina (32-2) can turn its attention to living up to the lofty expectations that have followed the Tar Heels all season, even as they allowed themselves the small indulgence of a businesslike celebration.

“We didn’t dance around and climb on top of backboards and things like that,” North Carolina coach Roy Williams said. “It was a great feeling and a very satisfying feeling for us.”

Ellington finished with 24 points for North Carolina, which has won consecutive ACC tournaments for the fifth time. Hansbrough was named the tournament’s most valuable player after finishing with 18 points and 11 rebounds while scrapping inside the entire game against the third-seeded Tigers (24-9), following up on his 26-point day that included the last-second jumper to beat Virginia Tech 68-66 in Saturday’s semifinals.

Ellington, a 6-foot-4 sophomore, continued his season-long torture of Clemson, finishing 10-for-13 from the field to go with four rebounds and four assists. In January, he had a career-high 36 points and hit a last-second 3-pointer to give the Tar Heels’ a 90-88 overtime road win. A month later, he finished with 28 points as North Carolina rallied from 15 points down to beat Clemson 103-93 in double overtime, a loss that dropped the Tigers to 0-53 all-time in Chapel Hill.

This time, Ellington hit his first five shots to outduel Clemson’s K.C. Rivers in a back-and-forth game that was in doubt until the final seconds.

“It prepares us (for the NCAAs) because we know in the tournament every team is going to be tough,” Hansbrough said. “These teams played really tough and they were really aggressive. I think we did well and that’s the kind of atmosphere we’ll face in the tournament.”

Ty Lawson added 12 points and eight assists in one of his strongest performances since returning from a sprained left ankle that sidelined him nearly seven full games for North Carolina. Danny Green also had 12 points while Ginyard added 10 points and nine rebounds.

Rivers finished with 28 points and six 3-pointers for the Tigers, who saw their best ACC tournament run in more than four decades end just like all the others: without a title. Clemson was in the final for only the second time after upsetting No. 7 Duke in Saturday’s semifinals, with their only other appearance coming in 1962.

But, for the first time in a decade, the Tigers leave the ACC tournament knowing they’re headed for the NCAAs.

“I’m proud of the way the kids have played all year long, certainly in this tournament … and I’m pleased with the direction and growth of this program,” fifth-year Clemson coach Oliver Purnell said. “We probably played well enough to win against most teams in the country, but we played a great one today. We needed to play great, and we didn’t play great because we didn’t shoot it well.”

Clemson led 39-38 at halftime before the Tar Heels finally pushed ahead by getting out in transition for easy scores. The Tar Heels hit 15 of 20 shots to open the second half, using a 12-2 run to finally get some separation and eventually take a 72-59 lead on Green’s 3-pointer with 8:02 left.

While the lead ultimately held up, Clemson wouldn’t go away. The Tigers ran off eight straight points to get back in the game, and twice closed within four in the final 3 1/2 minutes. But they got no closer, with North Carolina hitting enough free throws on a shaky day at the line to hang onto the lead.

North Carolina shot 49 percent and held a 49-34 rebounding advantage which led to 20 second-chance points. The Tar Heels scored 24 points off the Tigers’ 17 turnovers and scored 34 fast-break points by attacking Clemson’s fullcourt press, offsetting a 14-for-24 day at the free throw line.

Clemson shot 42 percent for the game.

“It was definitely frustrating,” Rivers said. “We got it close, and all of a sudden they made another stretch run. We had to keep fighting hard on defense, but we just couldn’t find that one that was going to click and get us going again.”