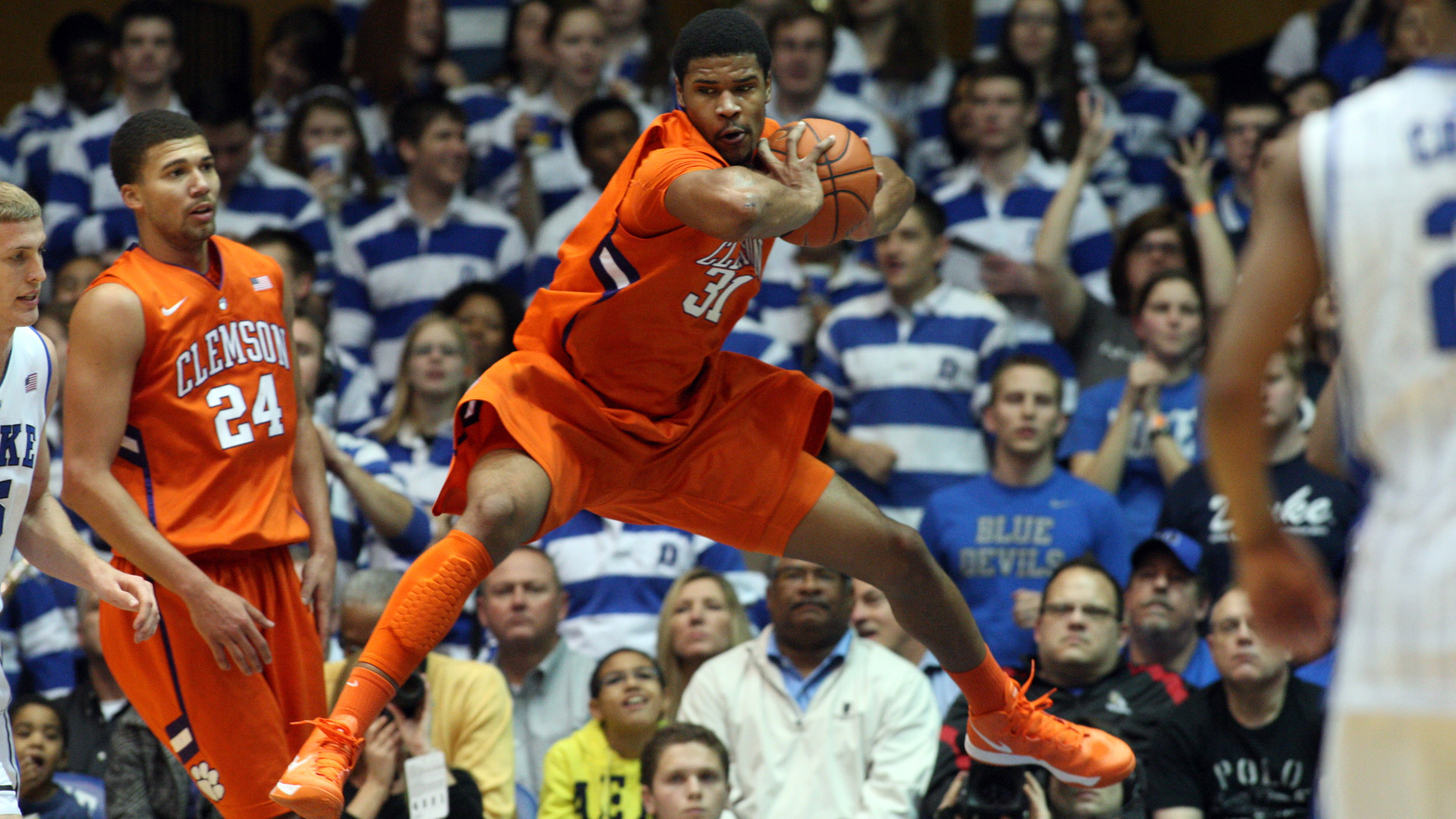 Clemson Falls to No. 1 Duke in Cameron Indoor Stadium 68-40

DURHAM, NC – Clemson scored just 10 points in the first half, its lowest output in 12 years, as No. 1 Duke ran away to a 68-40 victory over the Tigers on Tuesday at Cameron Indoor Stadium.  Duke improved to 15-0 with the win, 2-0 in the ACC.  Clemson fell to 8-6 overall, 0-2 to start league play.  The 28-point margin was Clemson’s worst defeat of the season.

Clemson struggled offensively, posting its lowest point total since a 38-point outing at Miami in 2005-06 when Oliver Purnell was Clemson’s coach.  The Tigers were 1-for-11 from three-point range, connecting on its 10th attempt with just over two minutes remaining.  Clemson shot just 28.3 percent for the game.

Devin Booker led the Tigers with a second straight double-double, posting 12 points and a career-high 15 rebounds.  He largely outplayed his center counterpart, Mason Plumlee, who made just 3-of-9 field goals and scored eight points – 10 under his season average.  Booker moved into the top 20 in Clemson history with 610 career rebounds.

Duke guard Quinn Cook went off for a career-high 27 points, including 20 in the second half.  Duke shot over 70 percent in the second half, the second opponent to do that on the season, joining Gonzaga.  The Blue Devils made 8-of-15 from three for a 53 percent clip.

Clemson took a 6-5 lead on an emphatic slam inside by Booker, but Duke reeled off 13 straight points to take an 18-6 advantage.  Clemson went nearly eight minutes without a point, as Booker stopped the bleeding on a layup.  The Blue Devils responded and pushed their lead to 13 on two occasions, the last on a crossover move from Cook.

Duke’s lead was 25-10 at halftime after a pair of Kelly free throws and in the final minute.  The Tigers’ 10 points in the opening 20 minutes were a low under Brad Brownell and the fewest since Clemson scored nine against Wake Forest in 2001.  Clemson held Duke to just 29 percent shooting and 25 total points in the opening frame, the second lowest scoring output of the season for the top-ranked Devils.

The Tigers surpassed their first half point total in just 4:29 of the second half, scoring on a layup by Booker and then a steal and layup from Adonis Filer to cut the lead to 34-22.  The lead pushed to 46-28 on a three by Seth Curry, but the Tigers again responded.  Damarcus Harrison hit a floater and Filer made two free throws.  The lead was 49-34 in Duke’s favor, but Clemson turned it over two of its next five possessions and missed four straight freebies as the lead stretched to 57-36.  Cook hit another three with the shot clock expiring to push the lead to 60-37.

The Tigers return home for two straight at Littlejohn Coliseum.  Next up, Clemson faces Virginia on Saturday, Jan. 12.  The game is scheduled for a noon start and will be televised by the ACC Network.