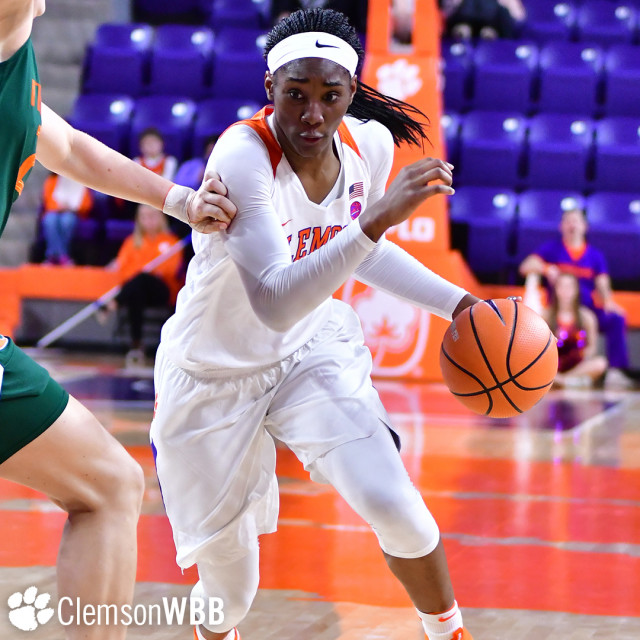 CLEMSON, S.C. – Two sophomores, Kobi Thornton and Jaia Alexander, scored 18 points each on Sunday afternoon, but their offensive production was not quite enough, as the Clemson women’s basketball team dropped a 72-60 decision to Miami on Sunday afternoon at Littlejohn Coliseum. With the loss, the Tigers are now 10-8 (0-5 ACC), while the Hurricanes improved to 12-6 (2-3 ACC).

The Tiger offense got on track in the second quarter, as Thornton scored six of her nine points, and junior Danielle Edwards scored all eight of her first-half points in the period. Edwards hit two clutch three-pointers in the final 2:30 to cut the deficit to seven points (30-37) and give the Tigers momentum heading into halftime.

In the second half, Clemson cut the deficit to seven points five different times, including twice in the last three minutes of play, but could not close the gap. The Hurricanes connected on four of seven three-point baskets in the half to keep the game just out of reach.

Thornton’s 18 points tied her season-high in scoring, and she was just one rebound shy of a double-double, with nine. The 18 points came on an impressive 7-for-9 performance from the floor. Thornton also added three blocked shots and two steals in the contest. Alexander posted 18 points and five rebounds, and Edwards was the third Tiger in double figures in scoring, with 12 points. The point guard also recorded four assists and four steals in the game.

Clemson returns to the court on Thursday, Jan. 18 to host Boston College. Tipoff between the Tigers and Eagles is set for 7 p.m. at Littlejohn Coliseum.