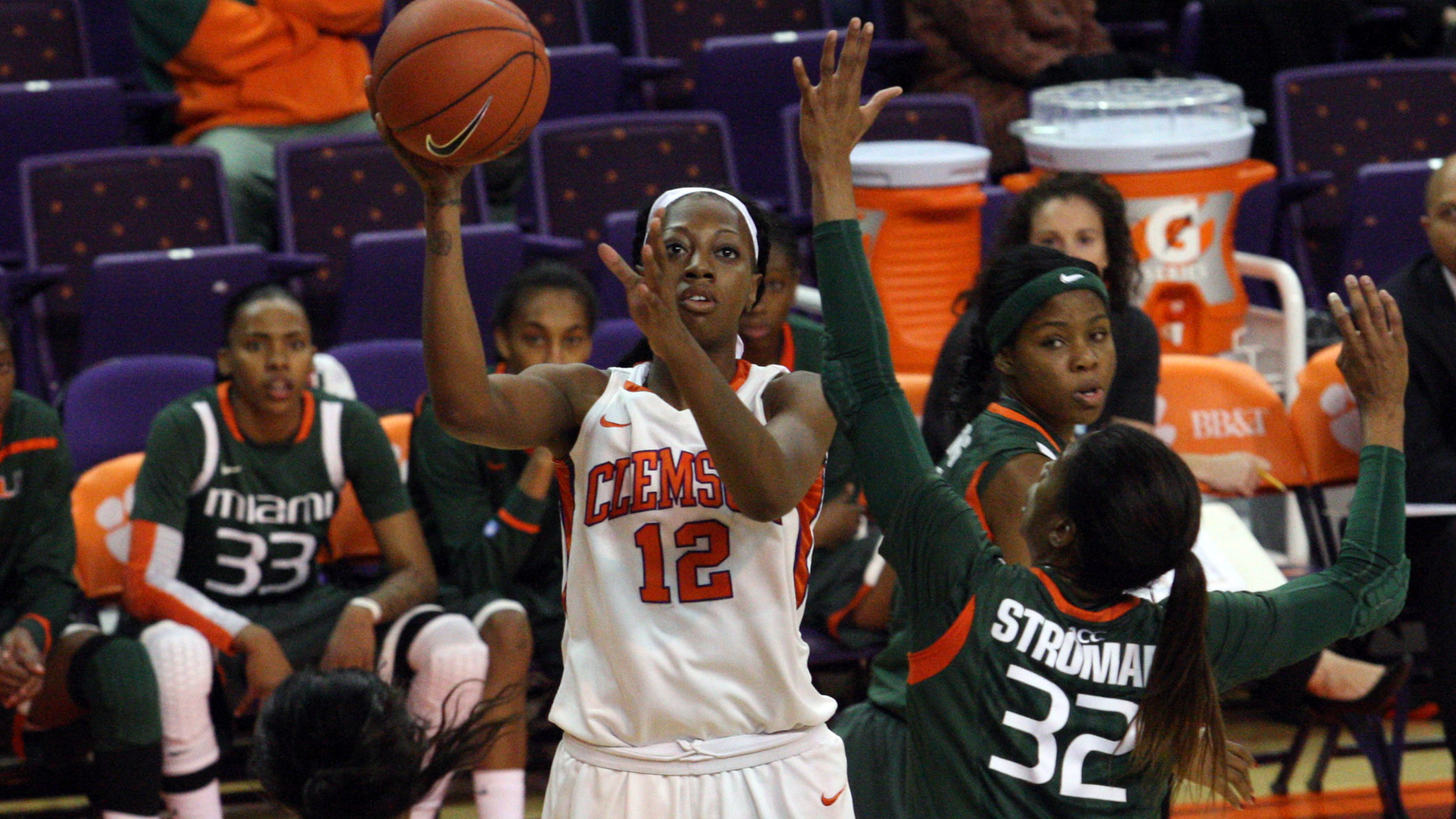 Clemson Falls to Miami in Littlejohn

CLEMSON, SC – Clemson whittled a double-digit deficit down to four, but Miami (16-7, 7-5 ACC) outscored the Lady Tigers (6-16, 2-9) 17-5 over the final eight minutes to pull away for a 62-46 win in Littlejohn Coliseum. Quinyotta Pettaway had her eighth double-double of the season with 17 points and 11 rebounds to lead Clemson, and also scored the 500th point of her career in the contest.

“We got the score down to 45-41 and that was our moment there,” said Itoro Coleman. “If we were going to do something to win the game, that was it. During those moments, we just have to be more focused on the little things.”

The Lady Tigers committed just ten turnovers, their second-best mark of the season, while forcing 15 Miami miscues. However, Miami finished with a 14-0 advantage in fast break points as they wore the Lady Tigers down in the second half. The Hurricanes also beat Clemson on the boards to the tune of 51-31 overall, leading to 19 second chance points.

It was Clemson’s second loss to Miami this season, as they fell earlier this year, 78-56, in Coral Gables on Jan. 3. Miami now leads the all-time series, 7-5, and won in Clemson for the fourth time in five chances overall.

Pettaway was again strong individually, hitting 7-13 from the floor at 3-4 at the line in 38 minutes. In two games against the Canes this season, she totaled 37 points and 19 rebounds. The double-double was her eighth of the season, and sixth in ACC play. The junior entered the game third in the ACC in rebounds per game at 9.2 overall and 10.3 in ACC play, and padded those numbers on Thursday.

“Quinyotta is coming into her own,” said Coleman. “She has been the most consistent player we’ve had all season. Quinyotta rebounds, and she is finding a way to score and getting to the free throw line and that is something that we expect from her everyday.”

South Carolina native Morgan Stroman had a big night for Miami, scoring 24 points and grabbing 16 rebounds. Stefanie Yderstrom, who had just three points in the first half, scored 13 points in the game, and hit a pair of crucial threes in the second half as Clemson threatened to take a lead.

After Miami roared out to a 10-0 lead in the first 3:22, Clemson scored eight of the next ten to get back within striking distance. Miami stretched the lead out to nine 5:30 to play in the half, before Clemson again charged back behind Pettaway, who scored on three straight possessions, the latter of which moved her career total to 501 career points.

Clemson pulled within three at 27-24 when Nikki Dixon hit her only field goal of the game with 2:05 left in the half. Miami took a 28-24 edge into the half, as Clemson hung around with strong play in the paint.

Stroman had 15 points and 11 rebounds in the first half to keep Miami on top, as she played in front of many of her friends and family.

Pettaway scored on the first possession of the second half as Clemson trailed, 28-26. Miami then outscored the Tigers 9-2 over the next three minutes to take a 39-28 lead, and looked to be pulling away.

Over the next ten minutes, Clemson outscored Miami 13-6 as a Gramlich three pulled Clemson to within six and a Nyilah Jamison-Myers jumper got to lead down to four with 7:56 to play.

Miami would then put on the clamps defensively, holding Clemson to just five points the rest of the way, as they pulled away down the stretch.

Clemson will play the next two games on the road, beginning with NC State in Raleigh on Sunday. They will return home on Feb. 17 against Virginia Tech in the Play4Kay Pink game.