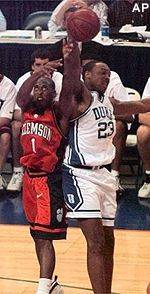 CHARLOTTE, N.C. (AP) – Duke opened its quest for its 11th Atlantic Coast Conference title in what looked to be convincing fashion. As far as coach Mike Krzyzewski is concerned, looks can be deceiving.

“We’re still looking at improving as a team,” Krzyzewski said after the Blue Devils dominated Clemson inside and out in a 94-63 victory Thursday night.

The Blue Devils (25-4) shot 56 percent, including making an Atlantic Coast Conference tournament-record 17 of 29 3-point attempts, and had a 38-28 edge on the boards, helping them defeat Clemson for the ninth consecutive time. But the game was less than two minutes old when Krzyzewski called a timeout and had a rather pointed discussion with his players after Clemson scored on a layup.

“You can’t take anything for granted,” Krzyzewski said later. “We didn’t start off defensively like we wanted.” After the timeout, however, little went wrong for the Blue Devils. Duke used a 31-4 run in the first half to take control of a game that matched the highest-scoring team in the ACC against the league’s last-place team in scoring and shooting.

“They hit a couple of shots and we turned the ball over, and then the game just got out of hand,” said Will Solomon, who led Clemson with 14 points. “I don’t think anyone in this tournament can beat them.”

Shane Battier had 18 points and freshman Mike Dunleavy made a successful return after missing four games with mononucleosis as Duke, the tournament’s top seed, advanced to Saturday’s semifinals. Dunleavy played 20 minutes, made three 3-pointers and finished with 16 points.

“It looked like getting sick helped him,” said teammate Chris Carrawell, who added 11 points. “He came out better, knocking down some shots.”

Dunleavy shrugged and smiled. “I guess it’s just being in an NBA arena,” Dunleavy, the son of Portland Trailblazers coach Mike Dunleavy, said of playing in the home of the NBA’s Charlotte Hornets.

Nate James added 18 points for Duke and Jason Williams had 14. Ninth-seeded Clemson (10-20) shot 37 percent and had 17 turnovers. The Tigers have lost three games to Duke this season by a combined 79 points.

“Once they took over, I don’t think we were ever capable of putting them back on their heels,” coach Larry Shyatt said. Clemson, losing to the Blue Devils in the ACC tournament for the fourth consecutive time, also got 11 points from Andrius Jurkunas and 10 from Ray Henderson.

Duke, the defending ACC champion, opened its title defense by shooting 61 percent in the first half, including 10 of 14 from 3-point range, and outrebounding Clemson 22-9.

The Tigers, trailing 15-14 and looking for their first lead, instead turned the ball over to start the decisive run. While Clemson missed 9-of-11 field-goal attempts, Duke made six of seven from 3-point range alone.

Dunleavy led the way, hitting all three of his long-range shots. Dunleavy capped the surge with a 21-footer from the top of the key, stretching Duke’s lead to 46-18. Jurkunas scored the next six points, but the Blue Devils stayed true to form and answered with a 3-pointer, this one from James, and stretched their lead to 23 at halftime.

“Mike Dunleavy separated the game,” Shyatt said. “He looks like he didn’t miss a beat.” Krzyzewski said he wasn’t sure how long Dunleavy would be able to play.

At one stage in the second half, the Tigers had 34 points – and were trailing by 31. Clemson fell behind by as many as 33 in the late stages.