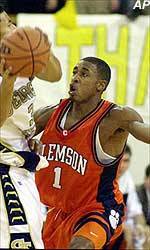 It was the sixth victory in nine games for the Yellow Jackets (16-10, 8-7 Atlantic Coast Conference) and clinched at least a .500 conference mark. Tech closes the regular season at Florida State Wednesday night.

The first half saw nine lead changes and four ties before Tech took the lead for good on Fein’s baseline drive that broke a 26-26 tie with 3:11 left in the half. The Jackets built the lead to 36-31 at intermission.

Hobbs and Edward Scott each added 10 points for Clemson and Hobbs had 10 rebounds.

Fein’s dunk came on a breakaway with 1:53 remaining and gave the Jackets an 80-6 lead.