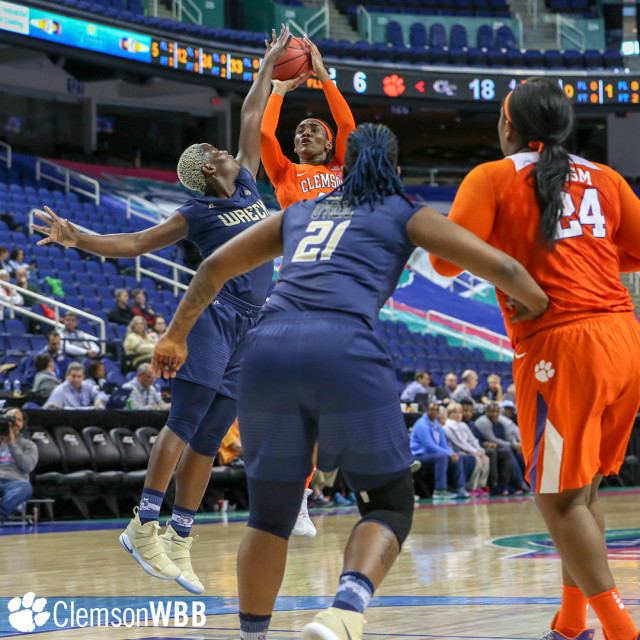 Clemson Falls to Georgia Tech in ACC Tournament First Round

GREENSBORO, N.C. – The Clemson women’s basketball team’s 2017-18 season came to an end in the first round of the ACC Tournament on Wednesday, as the No. 15-seed Tigers fell to No. 10-seed Georgia Tech, 61-52. The Tigers concluded the season at 11-19, while the Yellow Jackets improved to 18-12 and advanced to Thursday’s second round.

Georgia Tech jumped out to an 18-4 lead to start the first quarter, but the Tigers put together a 6-0 run in the final 1:08 to gain a little bit of momentum at the end of the quarter. Sophomore Kobi Thornton had six points and four rebounds in the period. The Yellow Jackets opened the second quarter hitting 5-for-7 field goals, but Clemson again clawed back to trail 22-31 at halftime. Thornton was in double figures in the first half with 12 points, to go along with six rebounds and two blocked shots.

The Yellow Jackets went on a 7-0 run to open the third quarter to extend their lead to 16 points, but the Tigers were again able to cut the deficit to single digits. Freshman Destiny Thomas hit a three, junior ACC All-Defensive Team selection Danielle Edwards took a charge, and senior Alexis Carter then sunk two free throws to make it a nine-point game, 33-42, with 4:14 to play in the third. Carter  scored eight points in the third quarter for the Tigers.

Redshirt junior Francesca Tagliapietra started the Tigers’ fourth-quarter comeback effort, hitting two three-point baskets in a one-minute span, and junior Aliyah Collier hit a contested jumper in the lane, cutting the deficit to four points, 47-51, with 6:18 remaining in the final period. Although Clemson never stopped battling, they were unable to get any closer than the four-point deficit.

Thornton finished with a double-double, with 13 points and 13 rebounds, and also tallied two blocked shots. It was her third-straight double-double, and her sixth of the season. Thornton also scored in double figures in 12 of the Tigers’ final 13 games of the season. Carter finished her Clemson career with 13 points in the game, and was a perfect 6-for-6 from the free throw line. Collier posted 11 points, all in the second half.